The study who Variable kinship patterns in Neolithic Anatolia revealed by ancient genomes is published in Current Biology.

Genomes from University of Liverpool excavations of burials around some of the earliest houses in history contributed to a major study by an international team of geneticists, anthropologists and archaeologists, revealing more about the remarkable diversity of kinship types in ancient human societies.

The first villagers in history were Middle Easterners who adopted a sedentary lifestyle roughly 12,000 years ago. These people not only built houses, but also buried their dead, young and old, within and around these buildings, while they continued living in them.

Although this subfloor burial tradition is well-known, the underlying social relations among these co-burials have remained a mystery. Many assumed these burials were biological family members, while others suggested that households and their burials represented more complex social groupings, organized through non-biological forms of kinship.

Senior co-author, Hacettepe University's Professor Füsun Özer, said: "Social kinship types are well-documented in many pre-industrial societies. "What we show in this study is that both sides may have been right, at least in the case of the Neolithic Middle East." 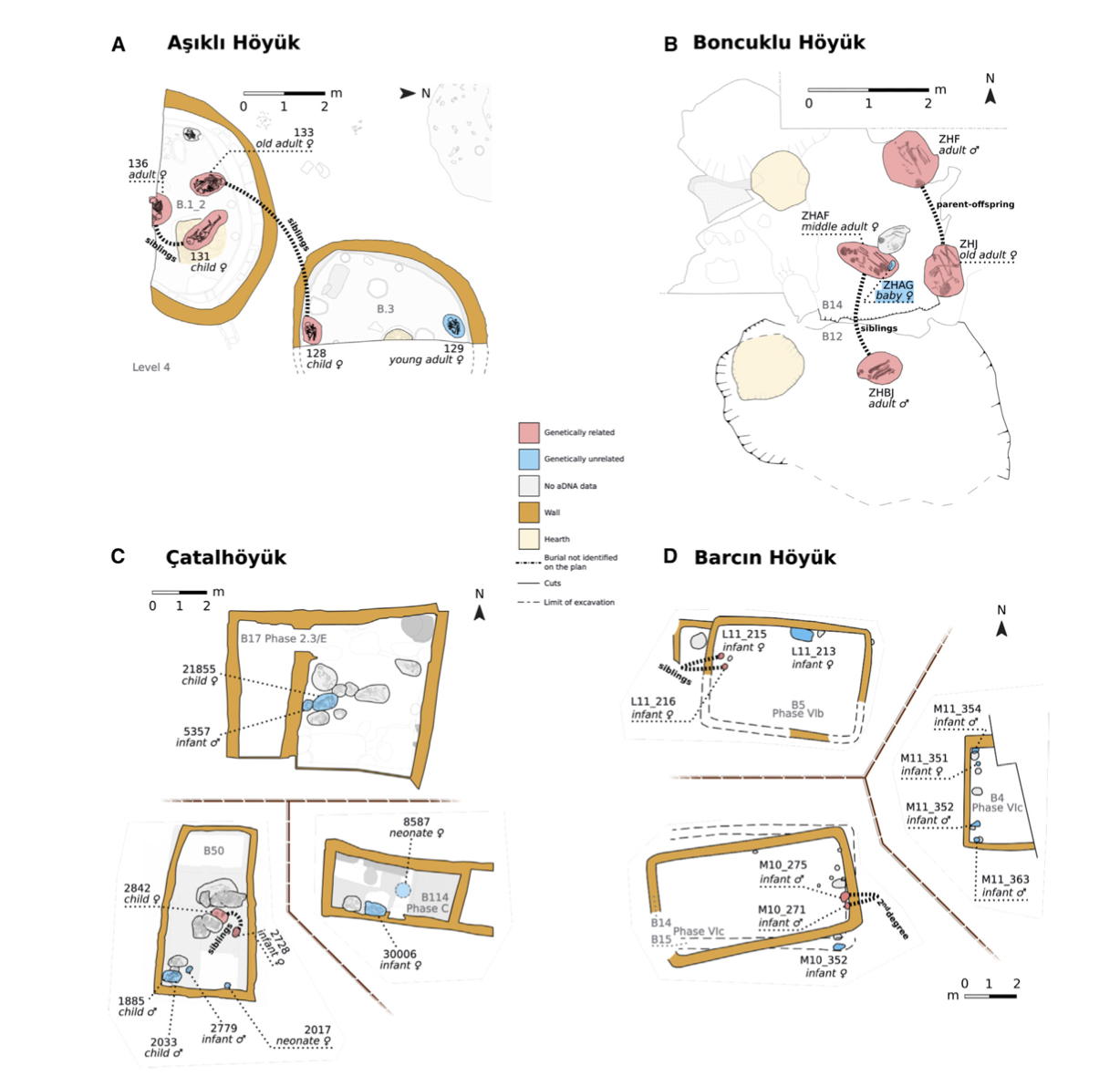 The team analyzed DNA from dozens of skeletons excavated from Neolithic Anatolian villages. Lead author Reyhan Yaka, who recently finished her Ph.D. at the Middle East Technical University (METU) in Ankara, explains that they generated new genomes from two Central Anatolian sites: Aşıklı Höyük and Çatalhöyük. She said: "We scanned 3 times as many bones, but could only produce usable DNA from 22 of these, due to the skeletons' poor preservation."

The team combined the new data with 37 published genomes from other sites: Boncuklu, Barcın and Tepecik-Çiftlik. The researchers then assessed biological relationships among burials excavated in the same or neighboring buildings. In the earliest villages studied, Aşıklı Höyük and Boncuklu Höyük (about 10,000 years ago), co-buried individuals frequently included siblings and parent-offspring pairs.

The University of Liverpool's Garstang Chair of Archaeology, Professor Douglas Baird; Director of Boncuklu excavations, Mihriban Özbaşaran from İstanbul University; and Güneş Duru from Mimar Sinan Fine Arts University, who lead the Aşıklı Höyük excavation, suggest this confirms the notion these early Neolithic societies were organized, at least partly, around biological family ties. But not all co-buried individuals had relatives buried in the same structures.

Professor Baird, who leads the Boncuklu excavation, notes the telling case of a perinatal baby in Boncuklu buried together with a woman with whom she had no biological connection—a good indicator of social dimensions of kinship in death, as well as life.

A role for social kinship in Neolithic communities

A more surprising result was found in two of the later villages, Çatalhöyük and Barcın, from the time when villages grew in size and farming was well-established, about 8,500 years ago. Notably, Çatalhöyük was a mega-site of its time and famous for its large population and its houses entered from the roof.

In both sites, the researchers successfully obtained DNA mainly from burials of children, infants, and babies. Intriguingly, in buildings with large numbers of such sub-adult burials, biological relationships were markedly rare.

The University of Bordeaux's Christopher Knüsel, senior co-author and part of the Çatalhöyük Human Remains Team, said: "There was no evidence for these children being members of biological families, nor of extended families."

The study also takes a step towards understanding changing gender roles in these Neolithic communities. Previous studies of cemeteries in Late Neolithic and Bronze Age Europe showed that patrilocal traditions were salient in these societies, with adult female burials consistently identified as outsiders. However, in Aşıklı Höyük and Boncuklu Höyük, adult women are found co-buried with siblings in the same buildings.

Patrilocal traditions may have emerged after the initiation of farming

Yılmaz Selim Erdal, an anthropologist at Hacettepe University and senior co-author, suggests this comparison supports the idea that matrimonial traditions and gender roles changed over time. Erdal said: "Patrilocal traditions may have emerged after the initiation of farming."

The researchers note that the question of how these earliest village societies were organized still needs deeper study. Senior co-author and former Newton Fellow at the University of Liverpool, Scott Haddow (University of Copenhagen) said: "But there is now better reason to suspect that the organizing principles of these societies went well beyond simple blood relations."

Some researchers suspect that such social kinship ties could underlie how large communities with possibly thousands of inhabitants, such as Çatalhöyük, could have maintained apparently egalitarian social principles.