In contrast to other known rural churches, the tombs had not been plundered, but were in an excellent state of preservation, and an unaltered and perfectly recorded stratigraphy of occupation of the nave has been documented that allows the original phase of the building and subsequent modifications to be dated with precision.

The results of the latest excavation campaigns, led by Javier Salido, Professor of Archaeology at the Autonomous University of Madrid (UAM) and Charo Gómez (Archaeology Team A) in the Cerrillo de El Rebollar (El Boalo, Madrid), have unearthed a rural church consisting of a rectangular hall with a single nave and finished off with an apse or squared chancel. The original floor of the building underwent important alterations that will be analysed in detail in future investigations. 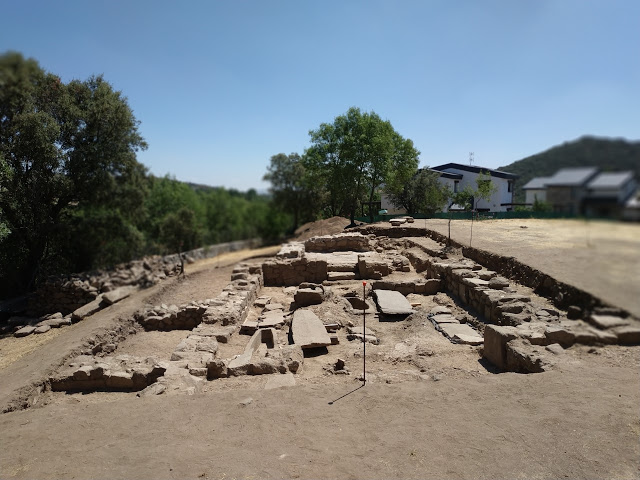 The clues for dating the building were hidden in the tombs that occupy the interior space of the nave of the church. In contrast to other known rural churches, the tombs had not been plundered, but were in an excellent state of preservation, and an unaltered and perfectly recorded stratigraphy of occupation of the nave has been documented that allows the original phase of the building and subsequent modifications to be dated with precision.

Eleven graves have been located inside the nave for the moment, perfectly oriented in an east-west direction, aligned with the perimeter walls.

"They are arranged in three rows, alternating tombs of children and adults. Carbon 14 dating has confirmed the chronology of one of the tombs between 656 and 727 AD, a date that most probably falls within the period of religious use of the building," say the excavation leaders.

"It is a cist grave whose skeletal remains were in an impeccable state of preservation. This information is corroborated by the grave goods of the other two main tombs of the nave we have just excavated. Unlike the first tomb, these two correspond to a different type: we find ourselves before granite sarcophagi carved from a single block," they add. 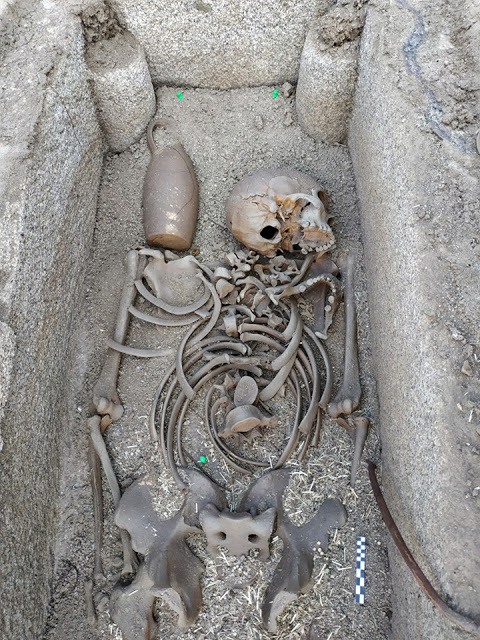 According to the researchers, the tomb located in the northwest corner of the nave (tomb no. 4) corresponds to a very well worked and polished sarcophagus, which had a perfectly carved closing slab, with a gable end. "The interior has mouldings at the head. Preliminary information on the preserved skeletal material indicates that a woman's body was deposited first  inside the sarcophagus and later a second body was placed above her remains, in this case a male body, associated with an undecorated jug from the Late Antiquity period.

The base of the jug is flat, with two front and symmetrical handles and a spout in the neck to dispense the liquid. Along with this tomb, two more cists were found attached, corresponding to infants. The other localized sarcophagus (nº 6) is less worked, unpolished and simply worked, without interior mouldings, with a high quality granite slab. "In this case, a presumably male individual was deposited, carrying two personal decorative objects that correspond to decorated rings, of a typology that allows it to be dated also to the Late Antique period".

The clear relationship between the tombs described and the structure of the building, perfectly oriented and arranged in rows with respect to the perimeter walls of the nave, have led researchers to date the rural church between the second half of the seventh century AD and the first third of the eighth century AD, "a very interesting chronology because it coincides with the final phase of the Visigothic period".