The research findings, jointly published by China's Palace Museum and Durham University, said Chinese ceramic sherds (archaeological term for ancient fragments of pottery or glass) dating to the Tang and Song dynasties (9th to 11th centuries AD) that have been recovered in Spain proved that trade links already existed between China and Western Europe along the Maritime Silk Road at that time.

"These finds are archaeological evidence that would indicate early economic and cultural links, directly or indirectly, between ancient China and the Mediterranean area," said Professor Chris Gerrard from the Department of Archaeology at Durham University.

"This changes our traditional understanding based on historical records about the long-distance maritime ceramic trade from China to Europe which occurred from the 16th century AD," he said. 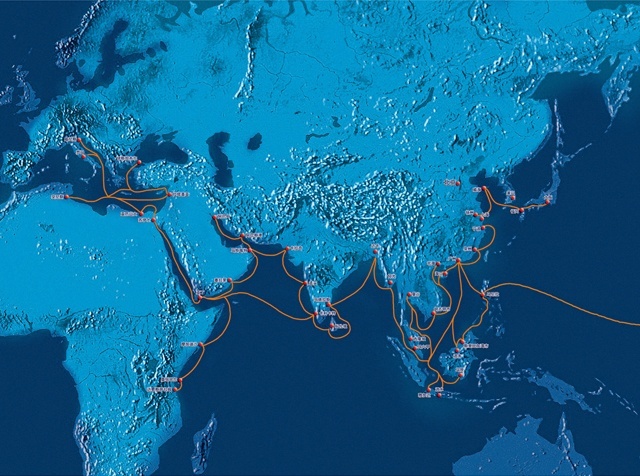 Originally it was believed that the Maritime Silk Road, which starts from China, only reached the Indian Ocean region during the Tang dynasty.

The ceramics, found in various Spanish localities including Zaragoza, Almeria and Valencia and studied by Chinese and British archaeologists over the past five years, showed that they were brought to the Mediterranean by Arab merchants before being traded in the Indian Ocean and the Red Sea regions, according to preliminary archaeological findings.

Wang Guangyao, deputy director of the Institute of Archaeology of the Palace Museum, told Xinhua that the ceramics had been manufactured in the most renowned ceramic kilns in China during the Tang and Song dynasties, including the Yaozhou Kiln in northwest China's Shaanxi, the Ding Kiln in north China's Hebei and Jingdezhen in east China's Jiangxi.

"They are among the best Chinese ceramics at that time," he said. "These early made-in-China products have deeply influenced the social, cultural and economic developments in Eurasia."

Wang said the new findings of the China-UK joint archaeological research had provided crucial evidence for the further understanding of the ancient Maritime Silk Road.

Zhai Yi, associate curator of the Palace Museum, told Xinhua that: "a Chinese white porcelain sherd with the lustre decoration, unearthed in Almeria, indicates that Chinese ceramic products were not only commodities in Eurasian trade, but also the re-processed products catering to the consumer markets. This may suggest that the global economy and culture had already initially emerged at that time."

"It showed that China had played a very crucial role in the early globalization process and the economic and cultural exchanges between the east and the west," Zhang Ran, post-doctoral research associate, with the Department of Archaeology at Durham University, told Xinhua.