Geochemical evidence reveals that armies in the Battles of Himera were a mixture of locals and outsiders, according to a study published in the open-access journal PLOS ONE by Katherine Reinberger of the University of Georgia, US, and colleagues. (You can click this link for read the entire article: Isotopic evidence for geographic heterogeneity in Ancient Greek military forces) These data contradict certain claims made in historical accounts by ancient Greek writers.

Who Fought In The Ancient Greek Battles Of Himera?

In 480 BCE, the ancient Greek city of Himera successfully fought off a Carthaginian army. In 409 BCE, Carthage attacked again, and Himera fell. Historians of the time, including Herodotus and Diodorus Siculus, write that Himera stood strong in the first battle thanks to the aid of Greek allies, while it went unaided in the second battle. However, given the limited and partisan perspective of those ancient historians, these accounts are liable to be incomplete and biased.

The authors of the present study tested these historical claims against geochemical evidence. They sampled strontium and oxygen isotopes from tooth enamel of 62 soldiers who fought in the battles. The soldiers' tooth chemistry varied based on their region of origin. 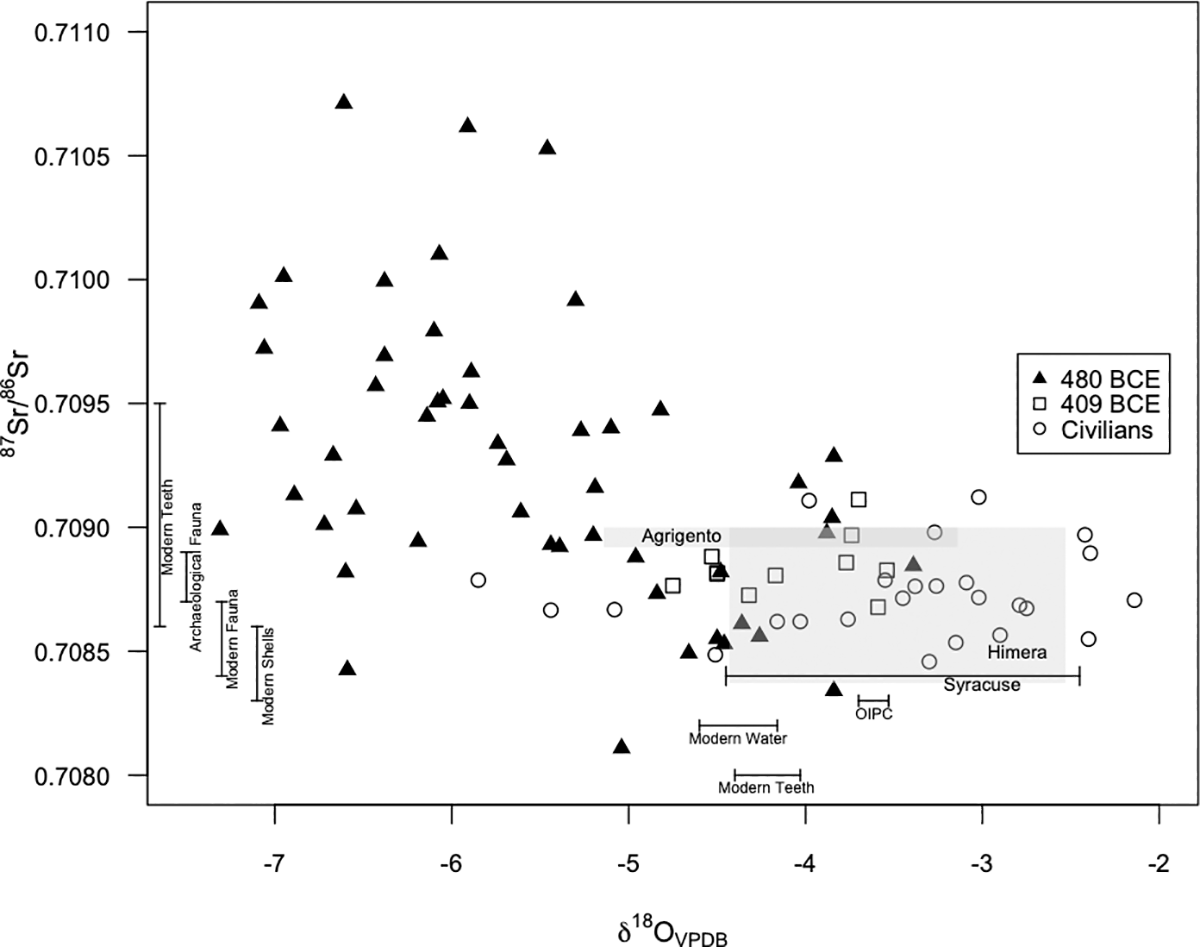 <<< Datas for soldiers from 480 BCE and 409 BCE, and civilians: Gray shaded areas represent the measured baseline values for Agrigento and Himera. The bar representing Syracuse’s expected δ18O values is placed close to the 87Sr/86Sr values that can be expected for Syracuse, based on its underlying geology (0.70800–0.70900). Bars at the base of the figure represent mean/stdev δ18O values of measured modern water, measured modern enamel, and estimated precipitation at Himera. Bars on the left of the figure represent mean/stdev 87Sr/86Sr values of measured modern teeth and fauna, archaeological fauna, and shells at Himera.>>>

The researchers found that only about one-third of Himera's soldiers from the first battle were local to the area, while around three-fourths were locals in the second battle, corroborating the written claims that Himera was more aided by outsiders the first time than in the second battle. However, the evidence also shows that, contrary to written accounts, many outsiders were not Greek allies, but were instead mercenaries hired from beyond Greek territories. 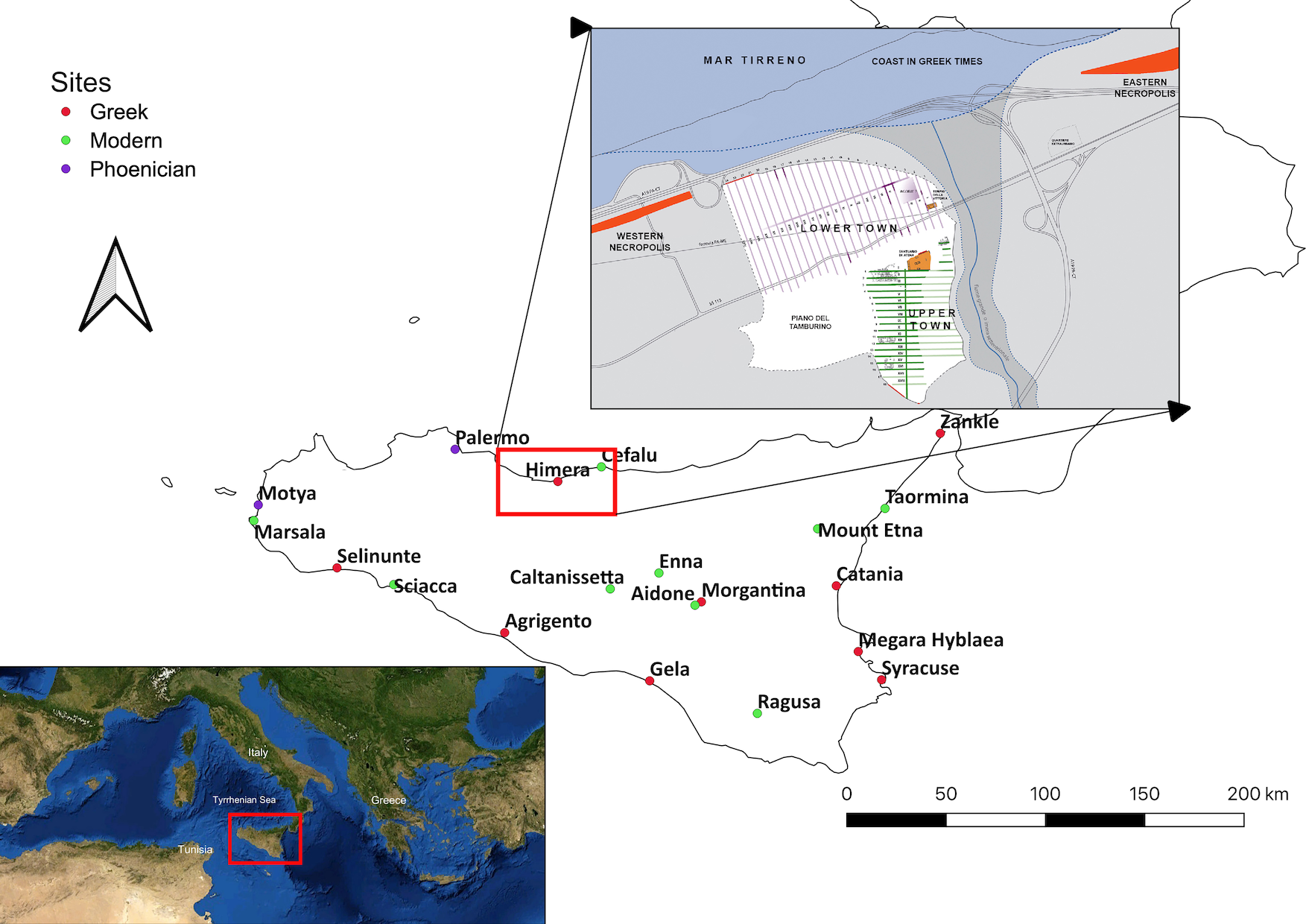 <<< Map of Sicily showing Greek and Phoenician colonies in the 5th century in the context of modern towns: The plan of Himera shows the relation of the Upper and Lower towns to the river and the Western necropolis where the Battles of Himera were fought along the western fortifications. Public domain image of the Mediterranean Sea via Wikimedia Commons from NASA World Wind, modified to show location of Sicily. Map of sites in Sicily created in QGIS by KLR and plan of Himera created by SV.>>>

This study demonstrates the power of archaeological remains to test the claims of historical texts and reveals a potential bias in ancient writings. Ancient Greek historians might have intentionally downplayed the role of foreign mercenaries in the Battles of Himera in an attempt to maintain a more Greek-centric narrative and to avoid the subject, potentially distasteful to Greek society, of hired foreign mercenaries. 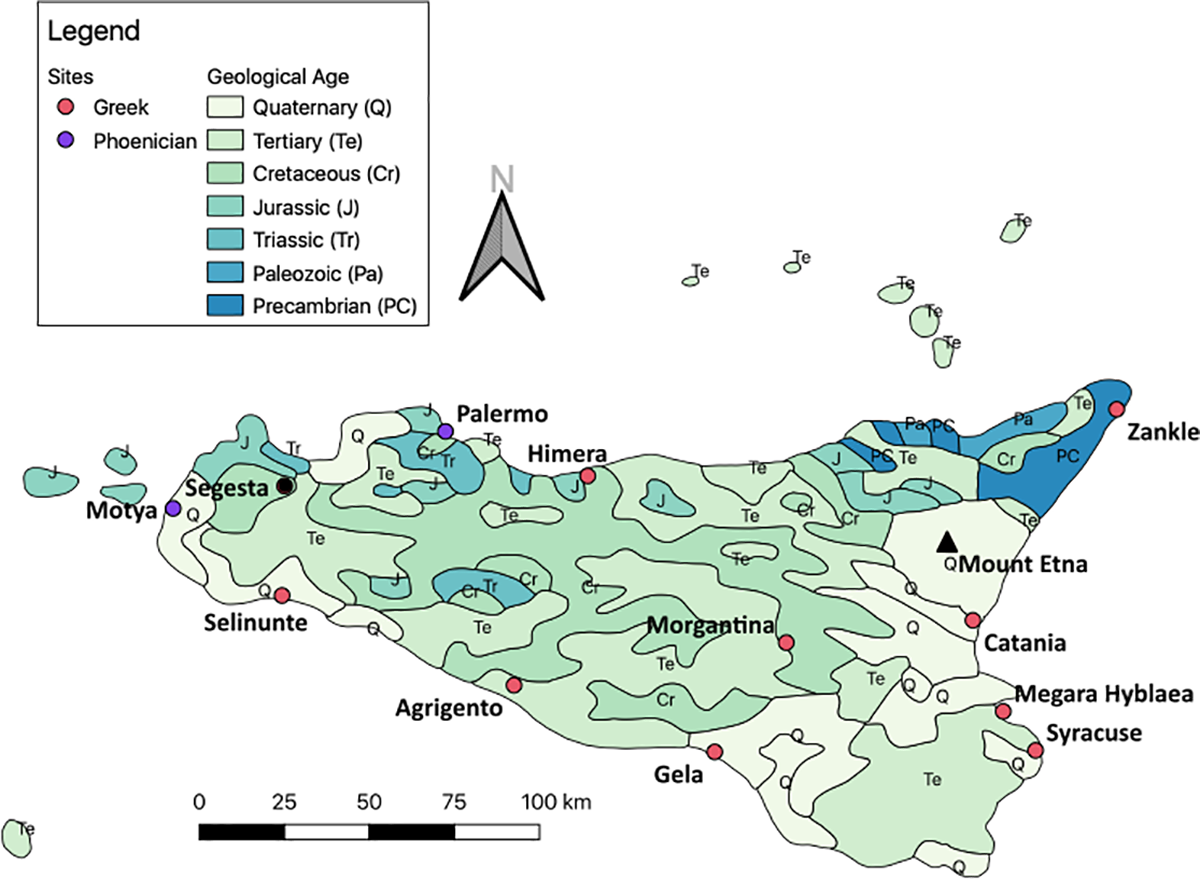 <<< Map depicting geologic ages of the underlying bedrock in Sicily: Youngest deposits are represented by the lightest color and get darker with older geologic ages. Created in QGIS using DataSource: USGS by KLR.>>>

<<< Map of predicted δ18OVPDB variability on Sicily: An Inverse Distance Weighting (IDW) Interpolation was created in QGIS from collected modern water, modern teeth, and calculated values from OIPC . Values from OIPC were calculated by inputting longitude, latitude, and altitude of locations across Sicily. Values from modern water and OIPC were converted from δ18OVSMOW to δ18OVPDB ‰ .>>>

The authors add: "Here we were able to use isotopes to support ancient historians, while also challenging those sources by finding evidence of mercenaries and potentially foreign soldiers from very diverse geographic origins. This study is also important to future studies of migration in the Mediterranean by expanding the network of comparative isotopic values."