The 74-centimeter-tall Tokoname ceramic jar was found 2 meters below the ground surface at a road construction site. The width of its mouth measures 60 cm in diameter while the jug at its widest part has a diameter of 94 cm.

A study using X-ray imaging confirmed that a ceramic jug unearthed late last year contains more than 260,000 feudal coins, weighs more than a ton and is worth tens of millions of yen.

The jug is estimated to date back to the first half of the 15th century and was discovered in December at the Arai Horinouchi archaeological site in the Kurohama district of Hasuda, Saitama Prefecture, once home to a samurai residence surrounded by a double moat.

The study also confirms that it contains one of the biggest hauls of medieval coins ever discovered in Japan.

“The 260,000 coins in the jug are likely worth 26 million yen to 30 million yen ($168,000 to $230,000) in today’s Japan,” said Keiichi Nakajima, a professor of medieval economic history at Keio University, who is a member of an expert panel studying the jug. “Three jugs are said to have existed there initially, so the total value could be around 100 million yen.” 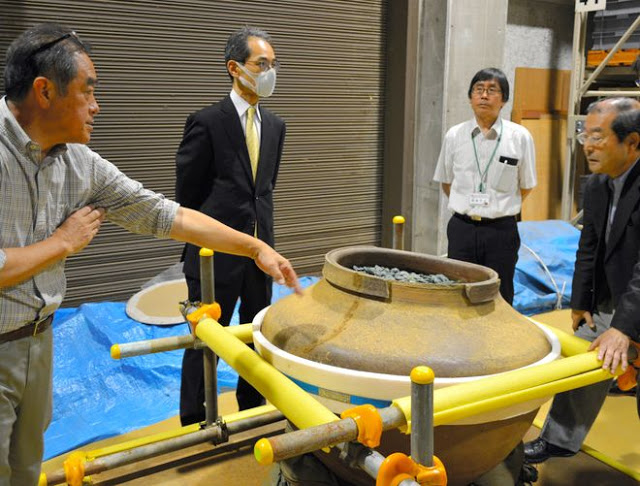 The Saitama prefectural education board initially attempted to use CT scanning at the Tokyo National Museum to survey the contents of the jug. But it dropped the plan because the container weighs 1,036 kilograms, exceeding the CT equipment’s load limit of 1 ton (907 kg).

X-ray imaging was then carried out with the help of a private screening device maker on Aug. 9. It revealed that coins fill the large jug from top to bottom.

Based on the assumption that the jug weighs 60 kg and one coin weighs 3.75 grams, the education board deduced that the entire relic weighs 976 kg.

The number of coins is consistent with a description written in ink on a “mokkan” wooden tablet discovered at the edge of the container’s stone lid. It states, “Nihyaku rokuju (thousand)” (260,000).

The 74-centimeter-tall Tokoname ceramic jar was found 2 meters below the ground surface at a road construction site. The width of its mouth measures 60 cm in diameter while the jug at its widest part has a diameter of 94 cm.

Tokoname, a city in Aichi Prefecture, is famous for its ceramics. 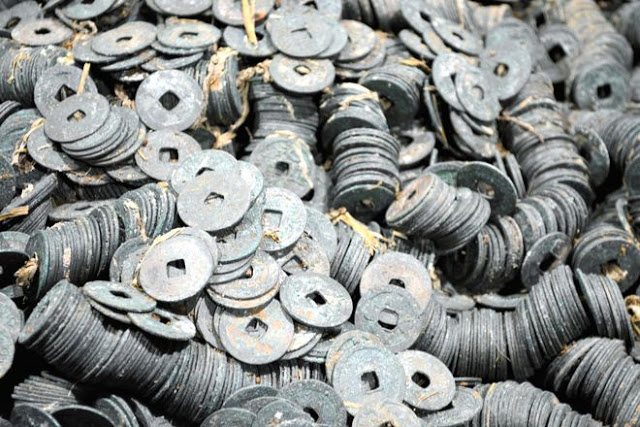 The oldest coin in the container is Kaigen Tsuho, which was first forged in 621, while Genpo Tsuho made in 1078 and Eiraku Tsuho produced in 1408 were also discovered inside.

“Coins had also been unearthed from the former site of a residence at the Nakazukyokanato archaeological site in Iwakuni, Yamaguchi Prefecture,” Nakajima said. “The large jug found in Arai Horinouchi is comparable to the previous find. And the latest discovery is also important in terms of the amount of coins contained within.”

The prefectural education board is looking to put the jug on public display.

But the jug is too fragile to be moved from the prefecture’s cultural property storage facility.

The expert panel proposed the container be kept there as it is. The panel members considered the huge costs to examine the coins one by one, although their types can be predicted to some extent.

The panel also said that showing the coins in the jug would have a greater impact than displaying them separately.

The education board is expected to start exhibiting the coins in fiscal 2021 at the earliest, after conducting a much closer analysis and completing preservation work, as well as installing an exhibition stand.

It will also create a replica of the container and the coins for displays elsewhere.