Scientists analyzed the microscopic markings on excavated stone tools including these to discover new findings about the ancient Maya from more than 1,000 years ago.

Salt is essential for life. As ancient civilizations evolved from hunters and gatherers to agrarian societies, it has not been clear how people acquired this mineral that is a biological necessity. However, an anthropologist at LSU discovered remnants of an ancient salt works in Belize that provide clues on how the ancient Maya at the peak of their civilization more than 1,000 years ago produced, stored and traded this valuable mineral. New analyses of stone tools found at this site, called the Paynes Creek Salt Works, reveal that not only were the Maya making salt in large quantities, but they were salting fish and meat to meet dietary needs and producing a commodity that could be stored and traded. 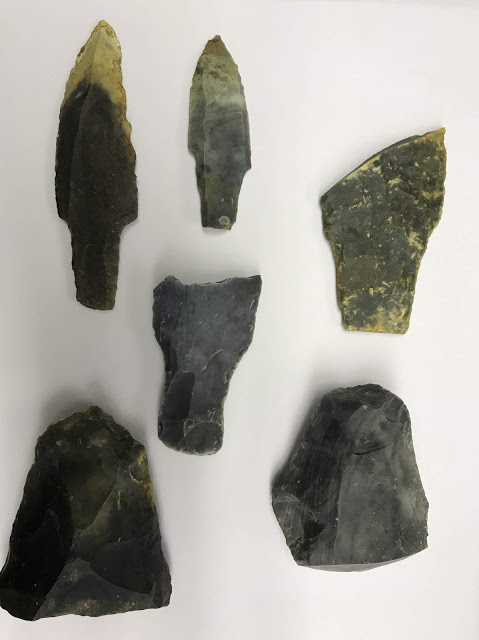 Scientists analyzed the microscopic markings on excavated stone tools including these to discover
new findings about the ancient Maya from more than 1,000 years ago [Credit: LSU]

"Since we found virtually no fish or other animal bones during our sea-floor survey or excavations, I was surprised that the microscopic markings on the stone tools, which we call 'use-wear,' showed that most of the tools were used to cut or scrape fish or meat," said Heather McKillop, the study's lead author and the Thomas & Lillian Landrum Alumni Professor in the LSU Department of Geography & Anthropology.

McKillop worked on this study with co-author Professor Kazuo Aoyama from Ibaraki University in Japan who is an expert on the use-wear damage on stone tools. McKillop's study site is a 3-square-mile area surrounded by mangrove forest that had been buried beneath a saltwater lagoon due to sea level rise. 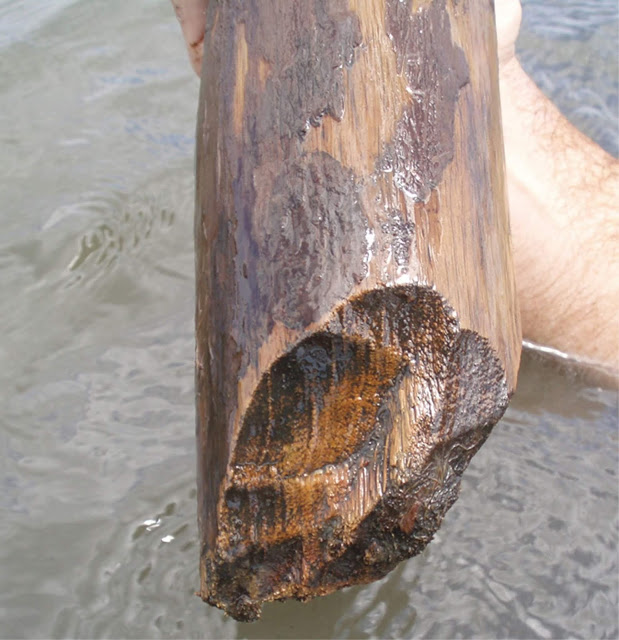 Sharpened end of wooden post 305 (8 cm in diameter) from a building at Ek Way Nal (Site 60) at the Paynes Creek SaltWorks, Belize. Use-wear analysis of chert tools indicates some were used for cutting or whittling wood Posts were preserved in mangrove peat at the submerged sites [Credit: PNAS]

The soggy mangrove soil, or peat, is acidic and disintegrates bone, shells and microfossils made from calcium carbonate. Therefore, no remnants of fish or animal bones were found. However, the mangrove peat preserves wood, which normally decays in the rainforest of Central America. After finding the preserved wood in 2004, McKillop and her students mapped and excavated the underwater sites with funding from the National Science Foundation and the National Geographic Society. They discovered more than 4,000 wooden posts that outline a series of buildings used as salt kitchens where brine was boiled in pots over fires to make salt. The pottery is also used in modern and historic salt-making and is called briquetage.

The salt was hardened in pots to form salt cakes and used to salt fish and meat, which were storable commodities that could be transported to marketplaces by canoe within the region. The Classic Maya from 300-900 A.D. may have traveled by boat along the coast and up rivers to cities about 15 miles inland to trade and barter.

"These discoveries substantiate the model of regional production and distribution of salt to meet the biological needs of the Classic Maya," McKillop said.

This paper is published in Proceedings of the National Academy of Sciences.