All skeletons showed consistent similarities with modern precision-grip group. Neanderthals were until quite recently often seen as simple-minded savages – powerful hunters with a short attention span.

A research team led by Senckeberg and University of Tübingen scientist, Professor Katerina Harvati, in close collaboration with the Natural History Museum in Basel, rejects the previous assumption that Neanderthals mainly relied on brute force when using their hands. In their study, published in the scientific journal Science Advances, the researchers show that Neanderthals almost exclusively used precision grips in their daily manual tasks.

Neanderthals (Homo neanderthalensis), who lived in Western Eurasia between 400,000 and 40,000 years before present, are often portrayed as physically strong but otherwise rather clumsy early humans that primarily relied on their strength for the production and use of stone tools. In contrast, modern humans were assumed to systematically use precision manual grips as part of their modern set of behaviors.

The robust anatomy of Neanderthal hand bones previously led us to believe that they handled their daily tasks primarily by force, even though archeological discoveries increasingly indicate that they showed sophisticated cultural behavior,” explains Prof. Dr. Katerina Harvati of the Senckenberg Centre for Human Evolution and Palaeoenvironment at the University of Tübingen.

Using an innovative method, Harvati’s team has now been able to show that Neanderthals primarily managed their day-to-day tasks using precision rather than power manual grips, contrary to previous hypotheses. “In our study, we were able for the first time to successfully link the anatomical evidence preserved in the skeleton of fossil humans with the archaeological evidence they left behind, providing a more complete understanding of the behavior of extinct humans,” explains Dr. Alexandros-Fotios Karakostis, the study’s first author.

The research reveals that Neanderthals systematically employed “precision grips” in their manual activities. Contrary to the “power grip,” which uses the entire palm, including all fingers and the thumb, for gripping, the holding and guiding of objects with the “precision grip” primarily involves the tips of the thumb and index finger.

The researchers from Tübingen and Basel developed an innovative method to analyze muscle markings using 3D scanning of hand bones. The new method also focused on muscle groups – rather than single muscles – that together produce precision vs power grips, and thus was able to uncover whether an individual commonly performed power or precision grasping during his or her lifetime. 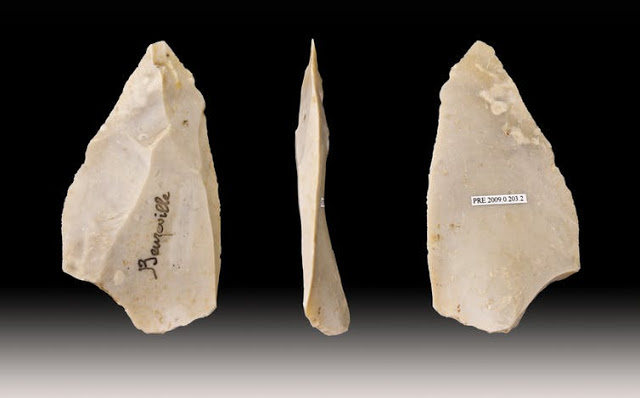 The method was verified using samples from the “Basel Spital Cemetery” collection of the Natural History Museum in Basel. “This unique collection from the 19th century comprises fully documented skeletons, including information about the circumstances of their life and their profession,” explains Dr. Gerhard Hotz of the Natural History Museum in Basel. “If, for example, we examine a blacksmith’s hand, we can show by means of the muscle attachment points that he regularly used ‘power grips’ during his day-to-day activities.”

None of the examined Neanderthal hand skeletons showed evidence of a sustained use of power grips. “We therefore refute the commonly held view of the clumsy, forceful Neanderthal. Like modern humans, Neanderthals were competent tool makers and tool users, who were using delicate and precise hand and finger movements in their daily activities,” adds Harvati in summary. In contrast, the hand bones of early Homo sapiens show traces of the systematic use of both precision as well as power grips, supporting the hypothesis that division of labor intensified for the first time during the Upper Paleolithic.