Howard Hughes Medical Institute and Broad Institute researcher David Reich commented on the oldest ancient DNA Study made about the prehistory of South and Central Asia and arguesed: We can rule out a large-scale spread of farmers with Anatolian roots into South Asia, the centerpiece of the 'Anatolian hypothesis' that such movement brought farming and Indo-European languages into the region. Since no substantial movements of people occurred, this is checkmate for the Anatolian hypothesis.

The largest-ever study of ancient human DNA, along with the first genome of an individual from the ancient Indus Valley Civilization, reveal in unprecedented detail the shifting ancestry of Central and South Asian populations over time.

The research, published in a pair of papers in Science (click for more: The formation of human populations in South and Central Asia) and Cell (click for more: An Ancient Harappan Genome Lacks Ancestry from Steppe Pastoralists or Iranian Farmers) also answers longstanding questions about the origins of farming and the source of Indo-European languages in South and Central Asia. 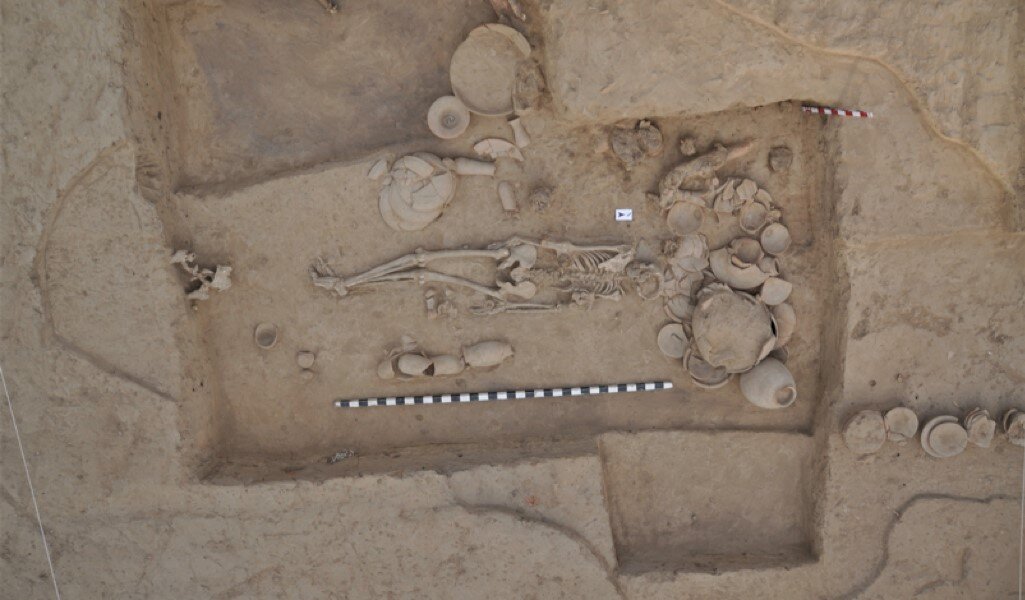 The first sequenced genome from an archaeological site associated with the ancient Indus Valley Civilization came from this woman buried at the city of Rakhigarhi [Credit: Shinde and Narasimhan et al. 2019]

By comparing these genomes to one another and to previously sequenced genomes, and by putting the information into context alongside archaeological, linguistic and other records, the researchers filled in many of the key details about who lived in various parts of this region from the Mesolithic Era (about 12,000 years ago) to the Iron Age (until around 2,000 years ago) and how they relate to the people who live there today.

"With this many samples, we can detect subtle interactions between populations as well as outliers within populations, something that has only become possible in the last couple of years through technological advances," said David Reich, co-senior author of both papers and professor of genetics in the Blavatnik Institute at Harvard Medical School. 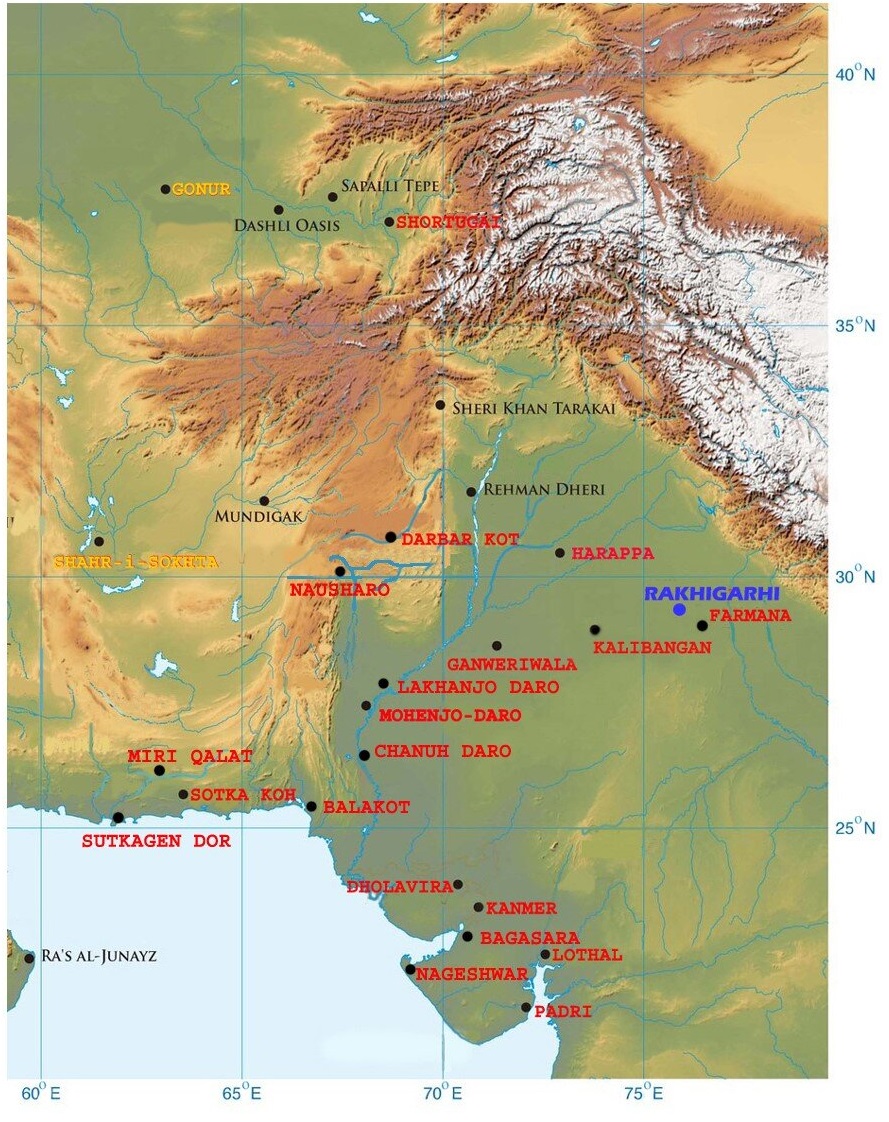 This map depicts the geographical span of the Indus Valley Civilization (IVC), showing the location
of Rakhigarhi (blue), other significant IVC sites (red), and sites to the north and west from other
archaeological cultures (other colors). The yellow labels indicate two sites where a minority
of buried individuals yielded ancient DNA matched that of the Rakhigarhi individuals [Credit: Vasant Shinde/Deccan College Post Graduate and Research Institute]

"These studies speak to two of the most profound cultural transformations in ancient Eurasia--the transition from hunting and gathering to farming and the spread of Indo-European languages, which are spoken today from the British Isles to South Asia--along with the movement of people," said Vagheesh Narasimhan, co-first author of both papers and a postdoctoral fellow in the Reich lab. "The studies are particularly significant because Central and South Asia are such understudied parts of the world."

"One of the most exciting aspects of this study is the way it integrates genetics with archaeology and linguistics," said Ron Pinhasi of the University of Vienna, co-senior author of the Science paper. "The new results emerged after combining data, methods and perspectives from diverse academic disciplines, an integrative approach that provides much more information about the past than any one of these disciplines could alone."

"In addition, the introduction of new sampling methodologies allowed us to minimize damage to skeletons while maximizing the chance of obtaining genetic data from regions where DNA preservation is often poor," Pinhasi added.

For decades, specialists have debated how Indo-European languages made their way to distant parts of the world. Did they spread via herders from the Eurasian Steppe? Or did they travel with farmers moving west and east from Anatolia (present-day Turkey)?

David Reich argues: This is checkmate for the Anatolian hypothesis

A 2015 paper by Reich and colleagues indicated that Indo-European languages arrived in Europe via the steppe. The Science study now makes a similar case for South Asia by showing that present-day South Asians have little if any ancestry from farmers with Anatolian roots.

"We can rule out a large-scale spread of farmers with Anatolian roots into South Asia, the centerpiece of the 'Anatolian hypothesis' that such movement brought farming and Indo-European languages into the region," said Reich, who is also an investigator of the Howard Hughes Medical Institute and the Broad Institute. "Since no substantial movements of people occurred, this is checkmate for the Anatolian hypothesis."

One new line of evidence in favor of a steppe origin for Indo-European languages is the detection of genetic patterns that connect speakers of the Indo-Iranian and Balto-Slavic branches of Indo-European. The researchers found that present-day speakers of both branches descend from a subgroup of steppe pastoralists who moved west toward Europe almost 5,000 years ago and then spread back eastward into Central and South Asia in the following 1,500 years. 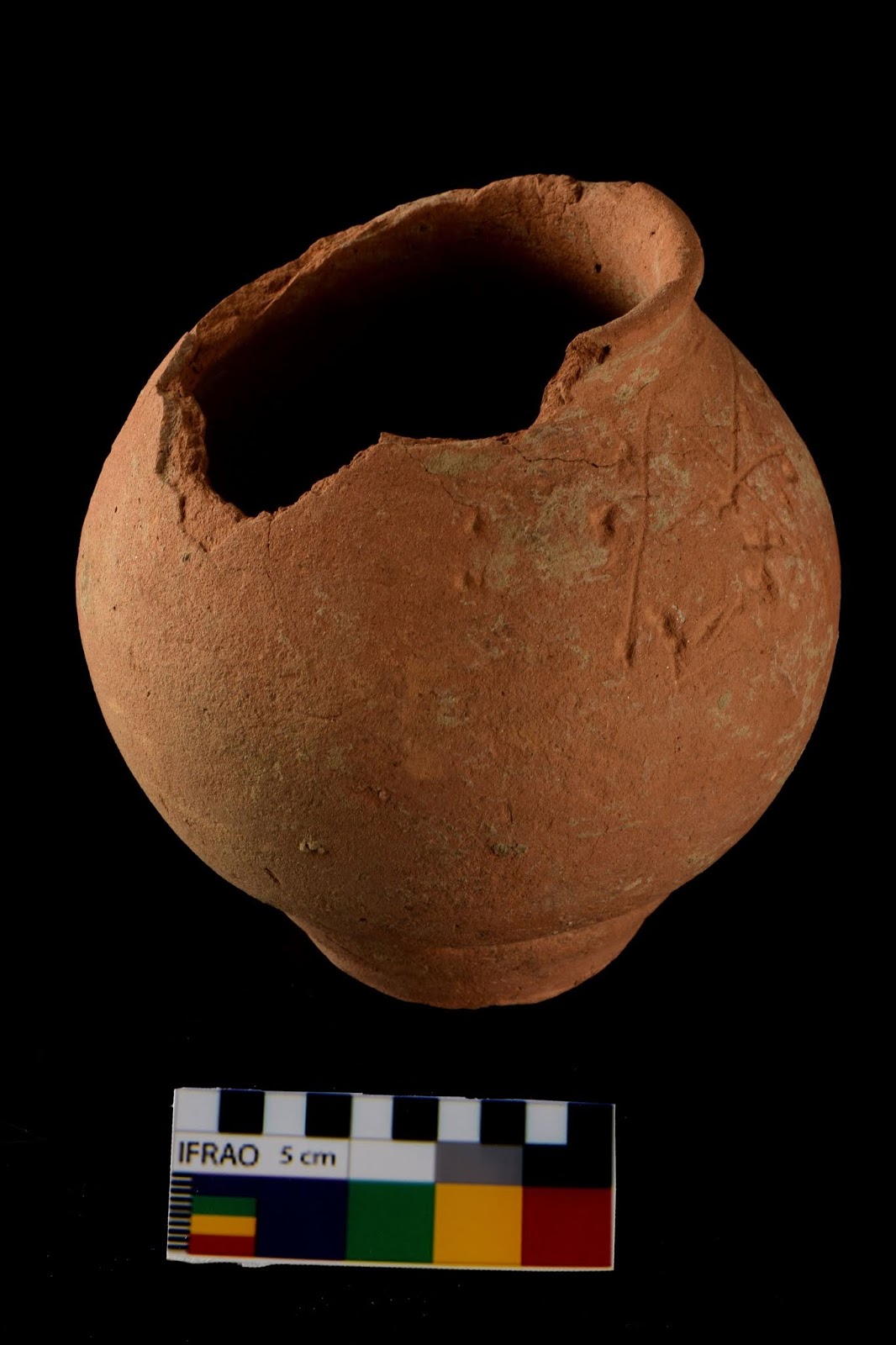 A photograph of a red slipped ware globular pot placed near the head of the skeleton that yielded ancient DNA. There are lines as well as indentations on the upper right side, just below the rim. The indentations on the body of the pot could be examples of ancient graffiti and/or "Indus script" [Credit: Vasant Shinde/
Deccan College Post Graduate and Research Institute]

"This provides a simple explanation in terms of ancient movements of people for the otherwise puzzling shared linguistic features of these two branches of Indo-European, which today are separated by vast geographic distances," said Reich.

A second line of evidence in favor of a steppe origin is the researchers' discovery that of the 140 present-day South Asian populations analyzed in the study, a handful show a remarkable spike in ancestry from the steppe. All but one of these steppe-enriched populations are historically priestly groups, including Brahmins--traditional custodians of texts written in the ancient Indo-European language Sanskrit.

"The finding that Brahmins often have more steppe ancestry than other groups in South Asia, controlling for other factors, provides a fascinating new argument in favor of a steppe origin for Indo-European languages in South Asia," said Reich.

"This study has filled in a large piece of the puzzle of the spread of Indo-European," said co-author Nick Patterson, research fellow in genetics at HMS and a staff scientist at the Broad Institute of MIT and Harvard. "I believe the high-level picture is now understood."

"This problem has been in the air for 200 years or more and it's now rapidly being sorted out," he added. "I'm very excited by that."

The studies inform another longstanding debate, this one about whether the change from a hunting and gathering economy to one based on farming was driven more by movements of people, the copying of ideas or local invention. 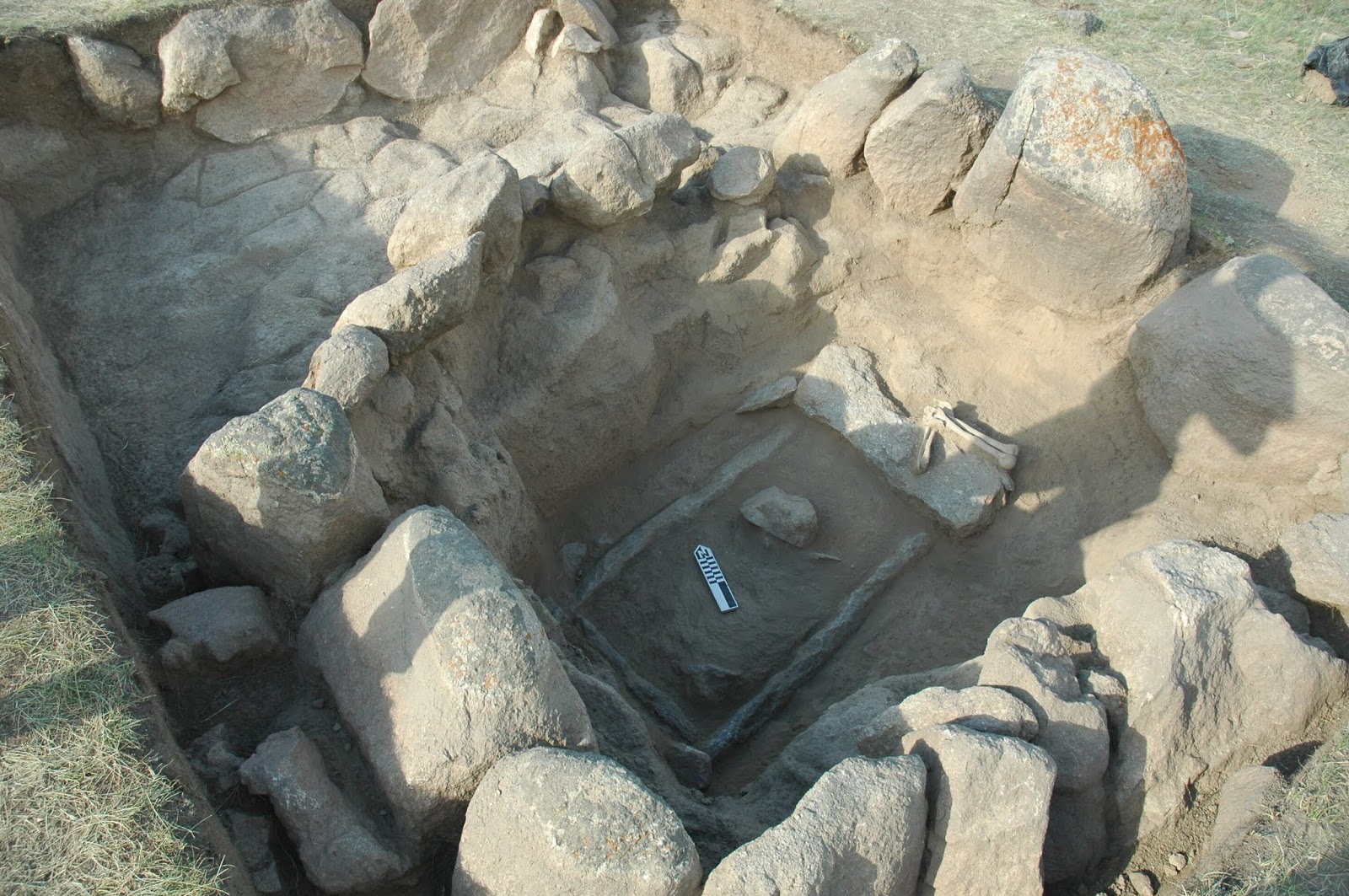 Detail of excavated human remains from a middle Bronze Age tomb at the site of Dali, Kazakhstan. Samples from this burial show a significant change in the ancestry of inhabitants after 2000 BC, shifting from a mixture
of West Siberian Hunter gatherers and Iranian farmers, to mixed ancestry with central steppe groups
and southern central Asian populations [Credit: Michael Frachetti]

In Europe, ancient-DNA studies have shown that agriculture arrived along with an influx of people with ancestry from Anatolia.

The new study reveals a similar dynamic in Iran and Turan (southern Central Asia), where the researchers found that Anatolian-related ancestry and farming arrived around the same time.

Then, as farming spread northward through the mountains of Inner Asia thousands of years after taking hold in Iran and Turan, "the links between ancestry and economy get more complex," said archaeologist Michael Frachetti of Washington University in St. Louis, co-senior author who led much of the skeletal sampling for the Science paper.


By around 5,000 years ago, the researchers found, southwestern Asian ancestry flowed north along with farming technology, while Siberian or steppe ancestry flowed south onto the Iranian plateau. The two-way pattern of movement took place along the mountains, a corridor that Frachetti previously showed was a "Bronze Age Silk Road" along which people exchanged crops and ideas between East and West.

In South Asia, however, the story appears quite different. Not only did the researchers find no trace of the Anatolian-related ancestry that is a hallmark of the spread of farming to the west, but the Iranian-related ancestry they detected in South Asians comes from a lineage that separated from ancient Iranian farmers and hunter-gatherers before those groups split from each other.

The researchers concluded that farming in South Asia was not due to the movement of people from the earlier farming cultures of the west; instead, local foragers adopted it.

"Prior to the arrival of steppe pastoralists bringing their Indo-European languages about 4,000 years ago, we find no evidence of large-scale movements of people into South Asia," said Reich.

First glimpse of the ancestry of the Indus Valley Civilization

Running from the Himalayas to the Arabian Sea, the Indus River Valley was the site of one of the first civilizations of the ancient world, flourishing between 4,000 and 5,000 years ago. People built towns with populations in the tens of thousands. They used standardized weights and measures and exchanged goods with places as far-flung as East Africa. But who were they? 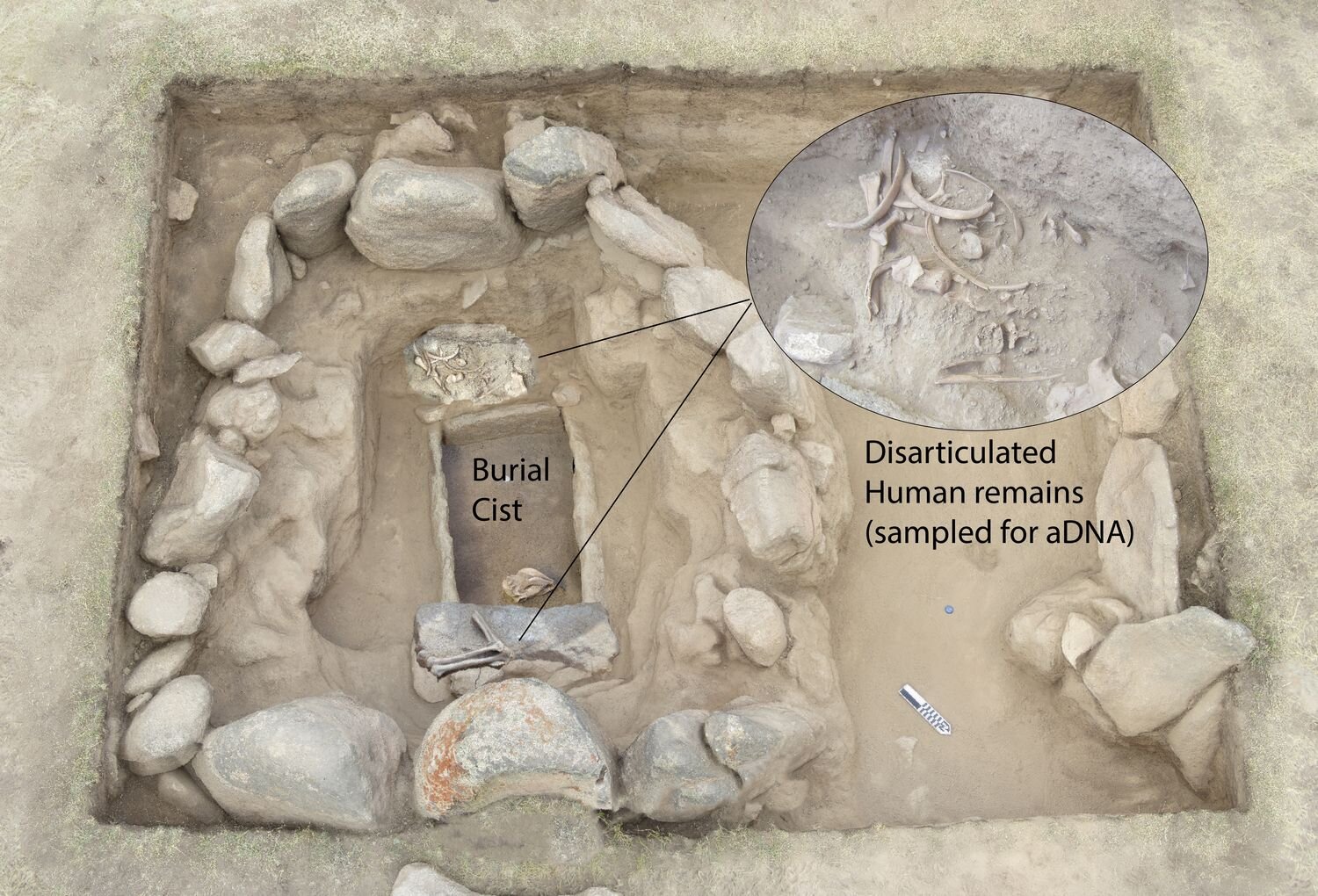 This middle Bronze Age burial tomb at Dali, Kazakshtan (ca. 1700 BCE) was robbed in antiquity and the human remains were piled haphazardly outside the burial cist. DNA extracted from these remains helped trace
the spread of steppe ancestry east and south toward India, from 2000-1500 BCE
[Credit: Michael Frachetti]

Before now, geneticists were unable to extract viable data from skeletons buried at Indus Valley Civilization archaeological sites because the heat and volatile climate of lowland South Asia have degraded most DNA beyond scientists' ability to analyze it. The Cell paper changes this.

After screening more than 60 skeletal samples from the largest known town of the Indus Valley Civilization, called Rakhigarhi, the authors found one with a hint of ancient DNA. After more than 100 sequencing attempts, they generated enough data to reach meaningful conclusions.

The ancient woman's genome matched those of 11 other ancient people reported in the Science paper who lived in what is now Iran and Turkmenistan at sites known to have exchanged objects with the Indus Valley Civilization. All 12 had a distinctive mix of ancestry, including a lineage related to Southeast Asian hunter-gatherers and an Iranian-related lineage specific to South Asia. Because this mix was different from the majority of people living in Iran and Turkmenistan at that time, the authors propose that the 11 individuals reported in the Science paper were migrants, likely from the Indus Valley Civilization.

None of the 12 had evidence of ancestry from steppe pastoralists, consistent with the model that that group hadn't arrived yet in South Asia.

The Science paper further showed that after the decline of the Indus Valley Civilization between 4,000 and 3,500 years ago, a portion of the group to which these 12 individuals belonged mixed with people coming from the north who had steppe pastoralist ancestry, forming the Ancestral North Indians, one of the two primary ancestral populations of present-day people in India. A portion of the original group also mixed with people from peninsular India to form the other primary source population, the Ancestral South Indians.

"Mixtures of the Ancestral North Indians and Ancestral South Indians--both of whom owe their primary ancestry to people like that of the Indus Valley Civilization individual we sequenced--form the primary ancestry of South Asians today," said Patterson.

The authors caution that analyzing the genome of only one individual limits the conclusions that can be drawn about the entire population of the Indus Valley Civilization.

"My best guess is that the Indus Valley Civilization itself was genetically extremely diverse," said Patterson. "Additional genomes will surely enrich the picture."