Reconsidering Demography and the Evolution of the World’s First Villages: Neolithic Baby Boom?

Neolithic Baby Boom?
Reconsidering Demography and the Evolution of the World’s First Villages

Near Eastern Neolithic villages are often interpreted by archeologists as have been occupied by thousands of farmers, prompting discussion of explosive population growth, early urbanism, and a demographic baby boom in the world’s earliest villages. Researchers have divergent opinions, however, on the best methods to estimate prehistoric population levels, the relative strength of ethnographic, architectural, and archaeological data sets to reconstruct how long houses were lived in, and how many people lived in individual houses and the broader village. In fact, there are now strong reasons to believe that historical reconstructions of Neolithic villages being inhabited by 3,000 to 8,000 people are significantly overstated. Recent interdisciplinary research illustrates that it is more likely that even larger villages, such as Aşikli Höyük and Çatalhöyük in Turkey, or Tell Sabi Abyad, Tell Halula, and ‘Ain Ghazal, in Syria and Jordan, were inhabited by around 1,000 to 1,200 people, with somewhere between 600 to 900 of these being adults. This understanding has important implications for how researchers model the evolution of world’s first villages, understand the tempo of the Neolithic Demographic Transition, and challenges us to reassessing our understanding of the emergence of household and community social networks.

Ian Kuijt is a Canadian-American archaeologist and filmmaker, Ian Kuijt was born in Vancouver, British Columbia, and grew up living on the rolling grassland prairies of southern Alberta, Canada. Earning a Ph.D. from Harvard University, and teaching at the University of Notre Dame as a Full Professor, he has deep interests in the human history of rural life, abandoned social and physical landscapes, and the development of the world’s first villages. He is the author of multiple books, journal articles, and essays on the origins of agriculture and life within small villages, and his academic writings, as well as documentary films, explore daily life in the past and present.

The talk will be in English. 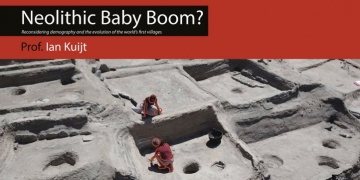