Aerial photo of the excavation area of an Early Neolithic settlement near Vrable in Slovakia [Credit: © Nils Muller-Scheeßel]

Human behaviour is influenced by many things, most of which remain unconscious to us. One of these is a phenomenon known among perception psychologists as "pseudo-neglect". This refers to the observation that healthy people prefer their left visual field to their right and therefore devide a line regularly left of centre.

A study published in the online magazine PLOS ONE now shows for the first time what effect this inconspicuous deviation had in the prehistoric past. (Click for read: A new approach to the temporal significance of house orientations in European Early Neolithic settlements)

A Slovak-German research team has investigated the alignment of early Neolithic houses in Central and Eastern Europe. Scientists of the Collaborative Research Centre (CRC) "Scales of Transformation" of Kiel University (CAU) and the Slovakian Academy of Sciences were able to prove that the orientation of newly built houses deviated by a small amount from that of existing buildings and that this deviation was regularly counterclockwise.

Archaeologist Dr. Nils Muller-Scheeßel, who coordinated the study within the CRC, says: "Researchers have long assumed that early Neolithic houses stood for about a generation, i.e. 30 to 40 years, and that new houses had to be built next to existing ones at regular intervals. By means of age determination using the radiocarbon method, we can now show that the new construction was associated with a barely perceptible rotation of the house axis counterclockwise. We see "Pseudoneglect" as the most likely cause of this." 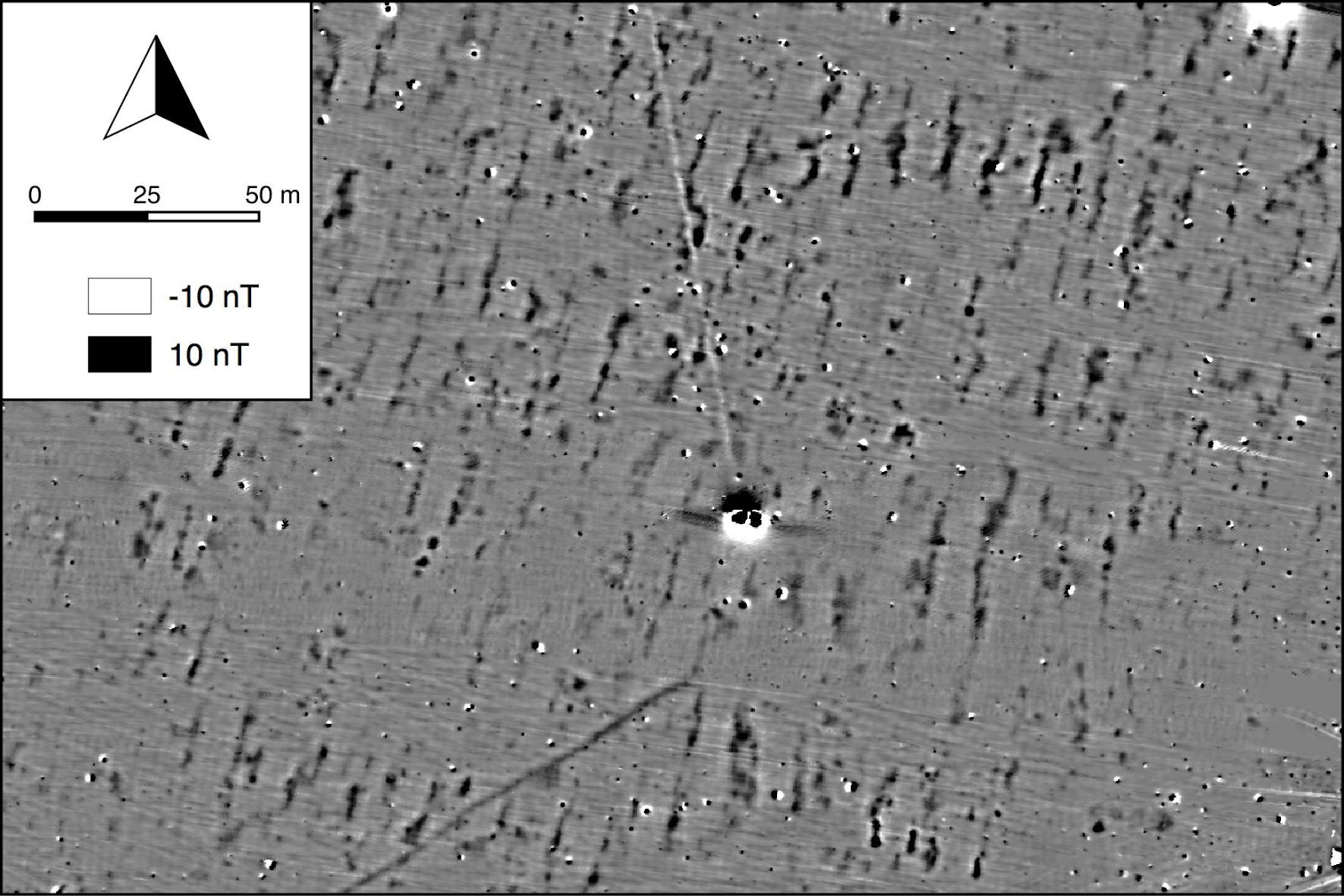 Magnetic plan of an early Neolithic settlement. Each two of the dark lines with a length of 20 to 30 meters
represent the part of a house [Credit: © Nils Muller-Scheeßel]

This insight was made possible by the interpretation of one of the fastest growing archaeological data sets at present, namely the results of geophysical magnetics measurements. Differences in the earth's magnetic field are used to visualise archaeological features lying underground. Early Neolithic house ground plans belong to the best identifiable types of features.

"In recent years, we have discovered hundreds of Early Neolithic houses in our field of work in southwestern Slovakia using geophysical prospection methods. Excavating all these houses is neither possible nor desirable for reasons of monument conservation. The possibility of using "Pseudoneglect" to bring the houses into a relative sequence without excavation and thus to break down the settlement activity of an entire small region raises our research to a completely new level", says Mister Muller-Scheeßel enthusiastically. "Absolute dating using scientific methods must of course confirm the basic trend in every case". 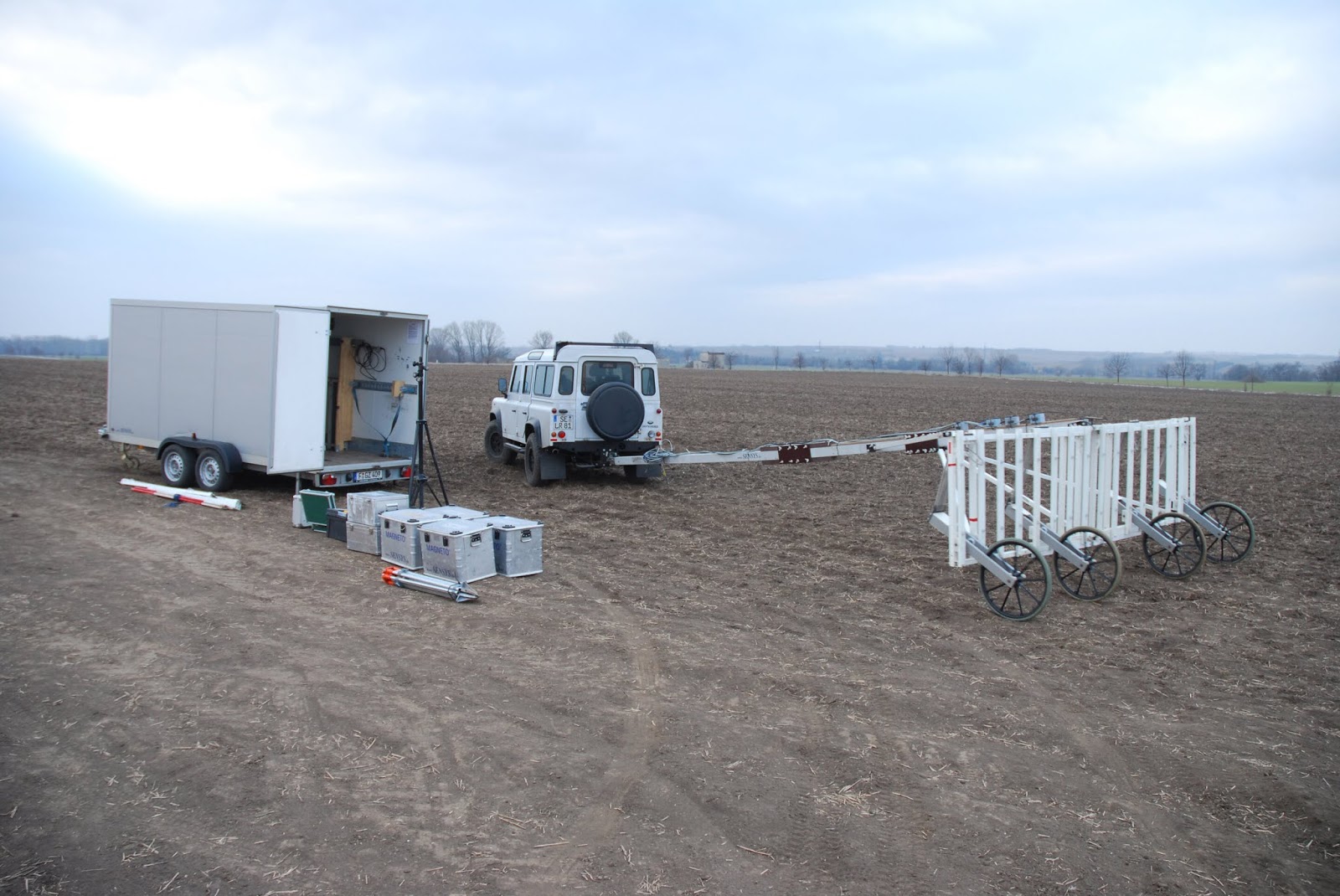 Preparation for the geophysical survey of an area near Vrable. The measuring device, which is pulled over
the ground, records magnetic anomalies below the surface. This makes archaeological features
such as house floor plans visible [Credit: © Martin Furholt]

The study also refers to comparable archaeological observations at other places and times, which show that similar changes in orientation also seem to apply to more recent prehistoric periods. The significance of "Pseudoneglect" thus extends far beyond the dating of early Neolithic houses.