This Study who published in the journal Science at 15 April 2021 (Click for look: Unearthing Neanderthal population history using nuclear and mitochondrial DNA from cave sediments), lays the ground for studying the population history of ancient hominins from trace amounts of nuclear DNA in sediments.

Researchers says; "Bones and teeth are important sources of Pleistocene hominin DNA, but are rarely recovered at archaeological sites. Mitochondrial DNA has been retrieved from cave sediments, but provides limited value for studying population relationships. We therefore developed methods for the enrichment and analysis of nuclear DNA from sediments, and applied them to cave deposits in western Europe and southern Siberia dated to between approximately 200,000 and 50,000 years ago. We detect a population replacement in northern Spain approximately 100,000 years ago, accompanied by a turnover of mitochondrial DNA. We also identify two radiation events in Neanderthal history during the early part of the Late Pleistocene. Our work lays the ground for studying the population history of ancient hominins from trace amounts of nuclear DNA in sediments"

Researchers at the Max Planck Institute for Evolutionary Anthropology developed new methods for enriching and analyzing human nuclear DNA from sediments, which are abundant at almost every archaeological site.

Until now, only mitochondrial DNA has been recovered from archaeological sediments, but this is of limited value for studying population relationships. The advent of nuclear DNA analyses of sediments provides new opportunities to investigate the deep human past.

When extracting ancient human DNA from the sediments, the scientists had to be careful to avoid the considerable amount of DNA from other mammals, such as bears and hyenas. "There are lots of places in the human genome that are very similar to a bear's DNA, for example," said Benjamin Vernot, the first author of the study. The researchers specifically targeted regions in the genome where they could be confident of isolating only human DNA, and they also designed methods to measure their success in removing non-human DNA. "We wanted to be confident that we weren't accidentally looking at some unknown species of hyena," said Vernot.

The scientists applied their techniques to study more than 150 sediment samples from three caves.

At two of these -- Chagyrskaya and Denisova Caves in the Altai Mountains of southern Siberia -- previous studies had analyzed DNA from bones. So the authors were able to compare the DNA from sediments to the DNA from bones. "The techniques we developed are very new, and we wanted to be able to test them in places where we knew what to expect," said Matthias Meyer, the senior author on the study. The researchers found that DNA from the sediments was most closely related to genomes retrieved from bones from those sites, giving them confidence in the robustness of their methods.

Excavations at the third site, Galeria de las Estatuas in northern Spain, led by Juan Luis Arsuaga from Universidad Complutense de Madrid, had uncovered stone tools spanning a period between 70 and 115 thousand years ago. But only a single Neanderthal toe bone had been found, and it was too small to sample for DNA.

"There was no way of studying the genetics of the Neanderthals who lived in Estatuas," said Asier Gomez-Olivencia, a scientist on the Estatuas team from Universidad del Pais Vasco/Euskal Herriko Unibertsitatea. The nuclear DNA extracted from the sediments revealed that not one, but two Neanderthal populations had lived in the cave, with the original group replaced by a later group approximately 100 thousand years ago.

When the scientists compared the sediment DNA to other skeletal samples, they noticed a striking trend -- there seemed to have been two "radiations" of Neanderthals, with the older Estatuas population stemming from one radiation, and the younger population from a second event. "We wondered if these radiations, along with the population replacement in Estatuas, might have been tied to climate changes, or to changes in Neanderthal morphology that occurred around this time period - although we will need more data to say for sure," said Juan Luis Arsuaga.

New insights into the deep human past

Even for sites where studies have previously analyzed DNA from bones, it is possible to glean new insights from the sediments. At Chagyrskaya Cave, earlier archaeological studies had suggested that the Neanderthal occupants belonged to a single population, and lived there for only a short time. But as previous work had only recovered a single genome from one of the bones found at the site, there was no way to tell if it was representative of the whole population that lived around Chagyrskaya Cave. The sediment DNA was able to confirm this hypothesis.

"We took sediment samples from throughout the stratigraphy, and they all looked very similar to the DNA from the bone, even though the sediment DNA came from multiple individuals," said Kseniya Kolobova at the Institute of Archaeology and Ethnography, Russian Academy of Sciences, the lead archaeologist at Chagyrskaya Cave.

"The dawn of nuclear DNA analysis of sediments massively extends the range of options to tease out the evolutionary history of ancient humans," said Vernot. By freeing the field of ancient DNA from the constraints of finding human remains and expanding the number of sites potentially suitable for investigation, "we can now study the DNA from many more human populations, and from many more places, than has previously been thought possible," said Meyer. 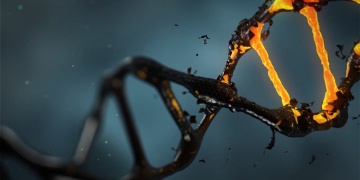