Archaeologists in Poland were stunned to discover the skeletal remains of four Scandinavian warriors many hundreds of miles from their homeland.

The 11th-century remains were discovered at a peculiar burial site dubbed by the archaeologists a death house. A chemical and genetic analysis of the remains found the four men were from Scandinavia, most likely from Denmark.

According to Dr Sławomir Wadyl of the Gdańsk Archeological Museum, the warriors were buried alongside a plethora of trinkets and armaments.

The archaeologist told the Polish Press Agency (PAP): “In the central part of the cemetery, there were four very well-equipped chamber graves.

Artistic reconstruction of one of the graves in the central part of the cemetery [Credit: K. Patalon, PAP]

"Men, probably warriors, were buried in them as evidenced by weapons and equestrian equipment laid together with them."

The four warriors were unearthed in the village of Ciepłe in Eastern Pomerania or Pomorze Wschodnie, northern Poland.

The Danish warriors would have been buried during the Piast dynasty – the first Polish dynasty to rule from the 10th century to the end of the 14th century. 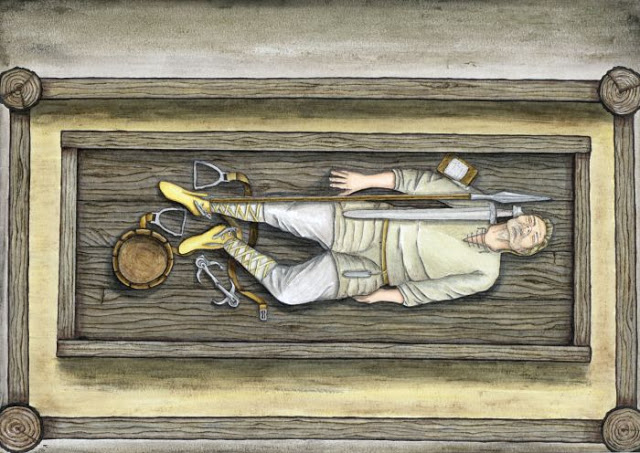 Equipment from one of the graves excavated in 1900. After La Baume [Credit: PAP]

Dr Wadyl said: "It turned out that all of the dead buried in the central part of the cemetery were not from the Piast State, but from Scandinavia, most likely from Denmark."

The warriors were buried within a larger necropolis, dating back to the Polish King Bolesław Chrobry or Bolesław the Brave I. Alongside them, the archaeologists uncovered a treasure-trove of weapons such as decorative swords and spears.

Evidence suggests the four men were skilled horse riders, due to the buckles, stirrups and spurs found next to their bodies. The archaeologists also uncovered old coins, metal trinkets, combs, pots and even the remains of animals. 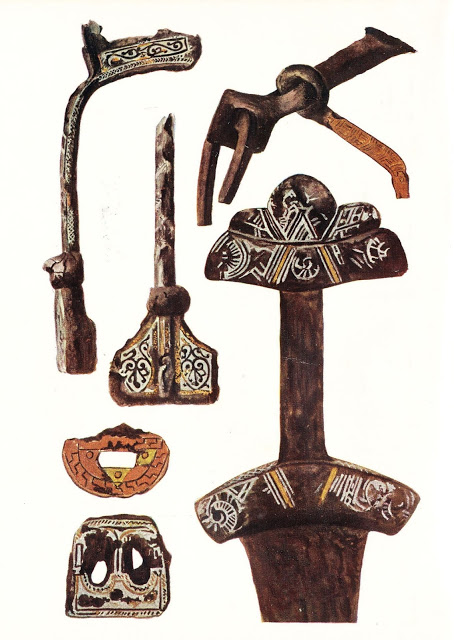 Z-type sword from the grave in the central part of the cemetery [Credit: J. Szmit, PAP]

The burial site itself is interesting because it is more typical of Eastern Europe and Scandinavia. The warriors were laid to rest in wooden chambers measuring about 11.5ft by 6.5ft (3.5m by 2m). The chambers were built much like a log cabin, with intersecting planks or logs of wood stacked on top of one another.

Dr Wadyl said: "It was one of the more popular house building methods at the time, so you could say they were a 'death house'."

In another part of the cemetery, the archaeologists found another different but equally intriguing burial method. The archaeologists unearthed two large coffins laid to rest inside of a chamber built from vertical, sharpened poles forced into the ground. 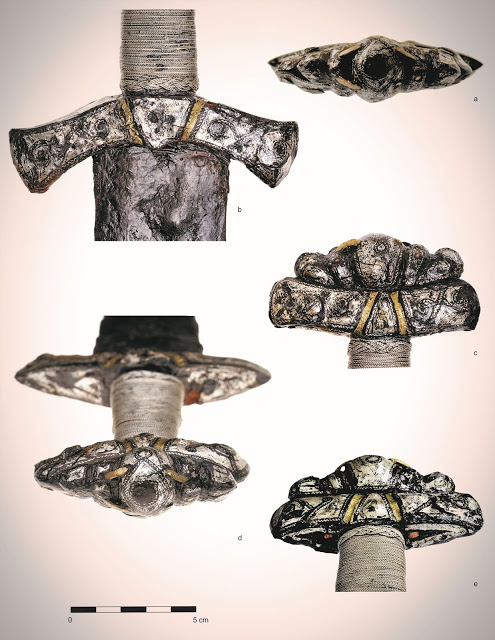 Spur found in one of the graves [Credit: K. Odya, PAP]

Dr Wadyl said: |These are the biggest chests of their kind that we know of in Poland’s territories at this time."

The collection of burial sites was likely surrounded by some form of fencing or a wooden palisade.

Dr Wadyl believes the Danish warriors were likely part of the local elite due to their elaborate and flashy burials.

Reconstruction of a stirrup found in one of the graves [Credit: K. Patalon, PAP] 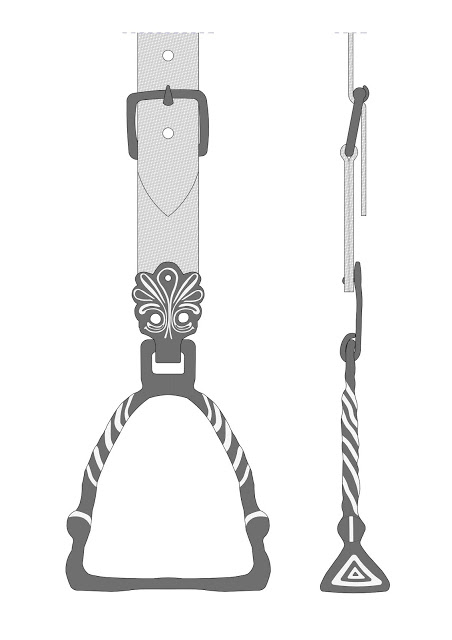 He said:"Those buried in the central part of the cement ray represented the social elite of the time, as evidenced by the monumental character of their graves and rich furnishings. They probably belonged to a group of elite riders but their role was probably was not limited to the function of warriors"

The archaeologist also thinks the men collected taxes from the local populace due to a set of weights found next to two of the dead.