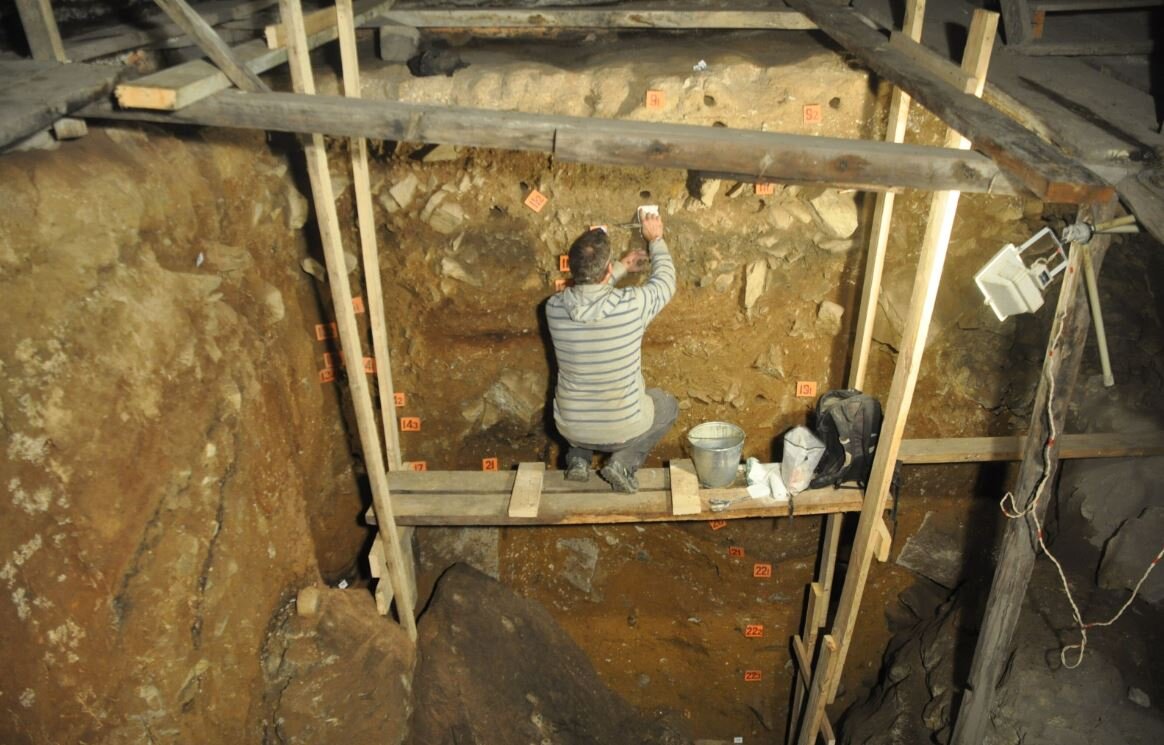 Dishing the dirt on an early man cave

Fossil animal droppings, charcoal from ancient fires and bone fragments litter the ground of one of the world's most important human evolution sites, new research reveals.

The latest evidence from southern Siberia shows that large cave-dwelling carnivores once dominated the landscape, competing for more than 300,000 years with ancient tribes for prime space in cave shelters.

A team of Russian and Australian scientists have used modern geoarchaeological techniques to unearth new details of day-to-day life in the famous Denisova Cave complex in Siberia's Altai Mountains. 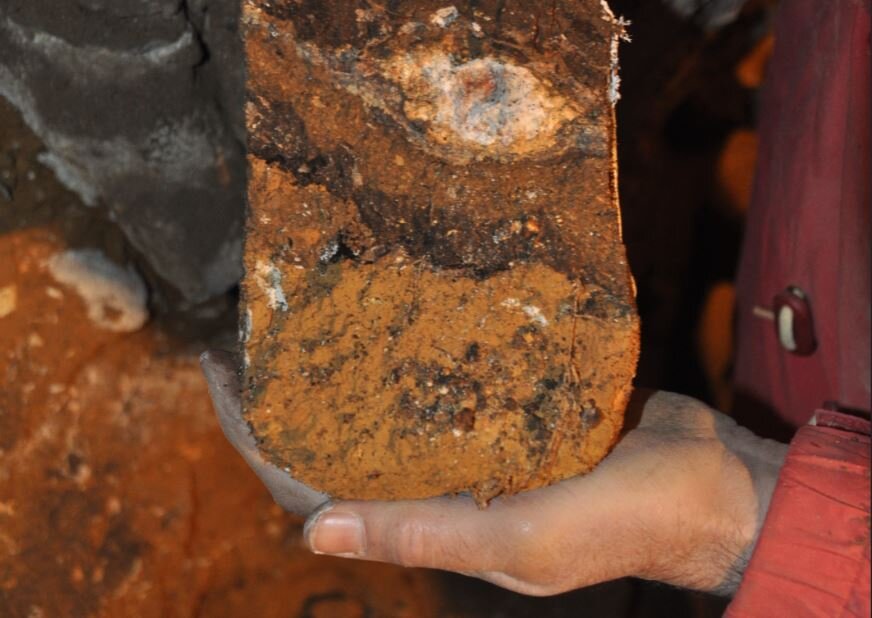 Large carnivores such hyena, wolves and even bears and at least three early nomadic human groups (hominins) - Denisovans, Neanderthals, and early Homo sapiens - used this famous archaeological site, the researchers say in a new Scientific Reports study examining the dirt deposited in the cave complex over thousands of years. (Click for more: Hominin and animal activities in the microstratigraphic record from Denisova Cave (Altai Mountains, Russia)

"These hominin groups and large carnivores such as hyenas and wolves left a wealth of microscopic traces that illuminate the use of the cave over the last three glacial-interglacial cycles," says lead author, Flinders University ARC Future Fellow Dr Mike Morley.

"Our results complement previous work by some of our colleagues at the site that has identified ancient DNA in the same dirt, belonging to Neanderthals and a previously unknown human group, the Denisovans, as well as a wide range of other animals". 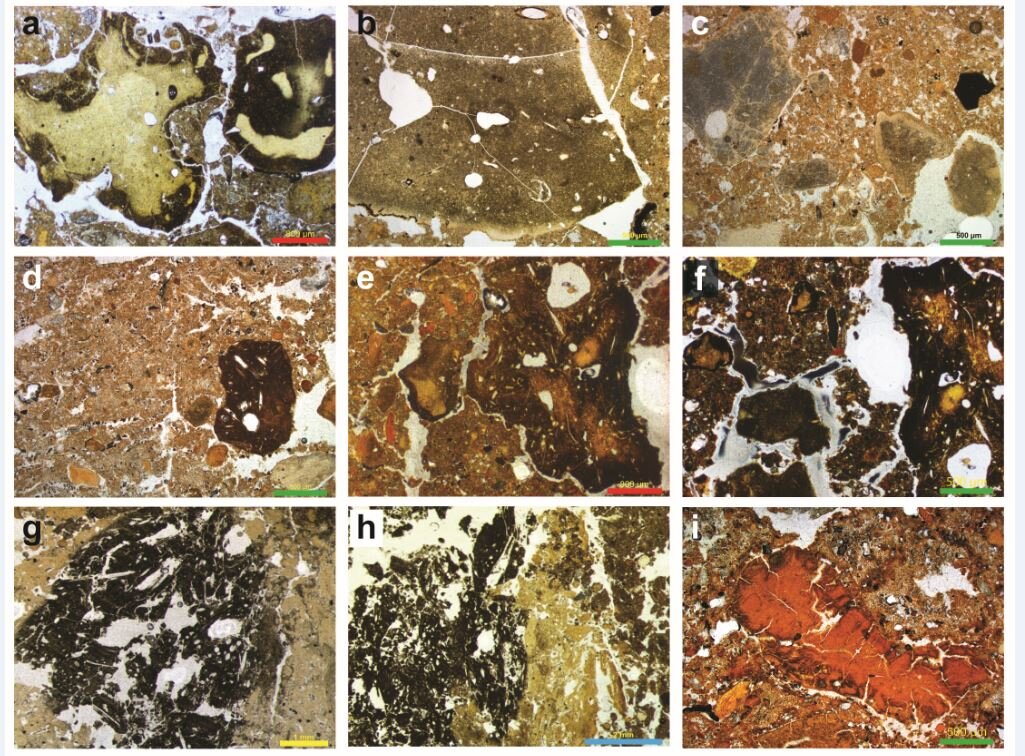 But it now seems that it was the animals that mostly ruled the cave space back then.

Microscopic studies of 3-4 metres of sediment left in the cave network includes fossil droppings left by predatory animals such as cave hyenas, wolves and possibly bears, many of their kind made immortal in ancient rock art before going extinct across much of Eurasia.

From their 'micromorphology' examination of the dirt found in Denisova Cave, the team discovered clues about the use of the cave, including fire-use by ancient humans and the presence of other animals.

The study of intact sediment blocks collected from the cave has yielded information not evident to the naked eye or gleaned from previous studies of ancient DNA, stone tools or animal and plant remains. Stratigraphic sequences exposed in the Main (DCM) and East (DCE) Chambers of Denisova Cave. (a) Southeast profile in DCM after excavations in 1984 and (b), Locations of sediment block samples collected in 2014. The concavities on either side of deformed lighter yellow layer 22 (which contains the lowermost artefacts) are infilled with sediments (layers 21–14) that are, in turn, overlain by sub-horizontal layers 13 to 9. (c) Southeast profile in DCE after excavations in 2013 and (d) Locations of sediment block samples collected in 2014. The Pleistocene sequence of hominin occupation spans layers 15 to 9. Layers 17–11 sag towards the centre, above the choke point, and are overlain by sub-horizontal layer 9. Black boxes in panels (b,d) indicate the positions of the micromorphology samples, and the corresponding sample numbers are inset in white; each sample produced 2–3 thin sections, labelled alphabetically from top to bottom. DCM micromorphology samples 4 and 6 were collected from the adjacent east profile.

Co-author of the new research, University of Wollongong Distinguished Professor Richard (Bert) Roberts, says the study is very significant because it shows how much can be achieved by sifting through sedimentary material using advanced microscopy and other archaeological science methods to find critical new evidence about human and non-human life on Earth.

"Using microscopic analyses, our latest study shows sporadic hominin visits, illustrated by traces of the use of fire such as miniscule fragments, but with continuous use of the site by cave-dwelling carnivores such as hyenas and wolves," says Professor Roberts.

"Fossil droppings (coprolites) indicate the persistent presence of non-human cave dwellers, which are very unlikely to have co-habited with humans using the cave for shelter." Summary stratigraphic logs of the sequences exposed in (a) DCM and (b) DCE, showing the locations of the micromorphological samples and key microstratigraphic features. To the right of each log, optical ages (in ka, with uncertainties at 95.4% probability) are shown for the major boundaries between lithological units in the thin sections, together with the associated archaeological phases)

This implies that ancient groups probably came and went for short-lived episodes, and at all other times the cave was occupied by these large predators.

The Siberian site came to prominence more than a decade ago with the discovery of the fossil remains of a previously unknown human group, dubbed the Denisovans after the local name for the cave.

In a surprising twist, the recent discovery of a bone fragment in the cave sediments showed that a teenage girl was born of a Neanderthal mother and Denisovan father more than 90,000 years ago.

Denisovans and Neanderthals inhabited parts of Eurasia until perhaps 50,000 to 40,000 years ago, when they were replaced by modern humans (Homo sapiens). 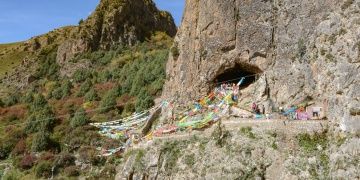 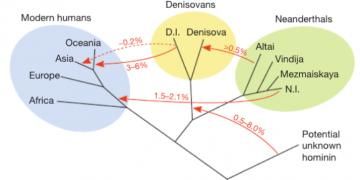 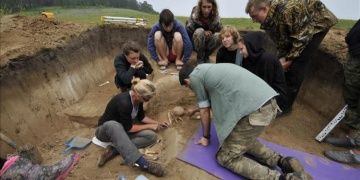