Researchers have identified what may be a previously unknown human ancestor, thanks to the help of artificial intelligence.

A new investigation into the genome of Asian populations has spotted the footprint of a long-ago hominid that appears to have been bred from two different species of human ancestor – Neanderthal and Denisovan.

This ancient hominid, who lived tens of thousands of years ago, then bred with modern humans who arrived to Asia after the ‘Out of Africa’ migration. 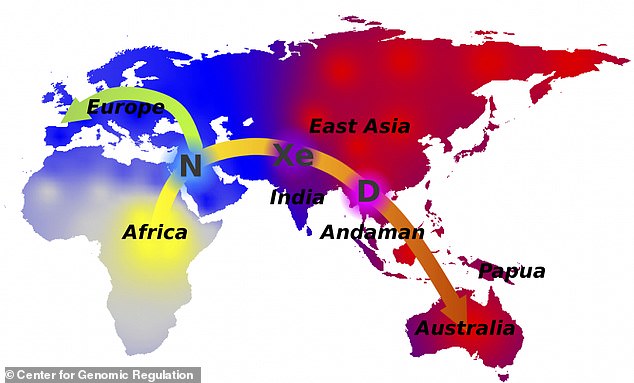 It comes just months after a different team revealed the discovery of a hybrid ‘love child’ born from a Neanderthal mother and a Denisovan father.

And, the new research from the Institute of Evolutionary Biology (IBE), Centro Nacional de Análisis Genómico (CNAG-CRG) of the Centre for Genomic Regulation (CRG), and the Institute of Genomics at the University of Tartu suggests such hominid hybrids may not have been all that uncommon after all.

‘About 80,000 years ago, the so-called Out of Africa occurred, when part of the human population, which already consisted of modern humans, abandoned the African continent and migrated to other continents, giving rise to all the current populations,’ says Jaume Bertranpetit, principal investigator at the IBE and head of Department at the UPF. 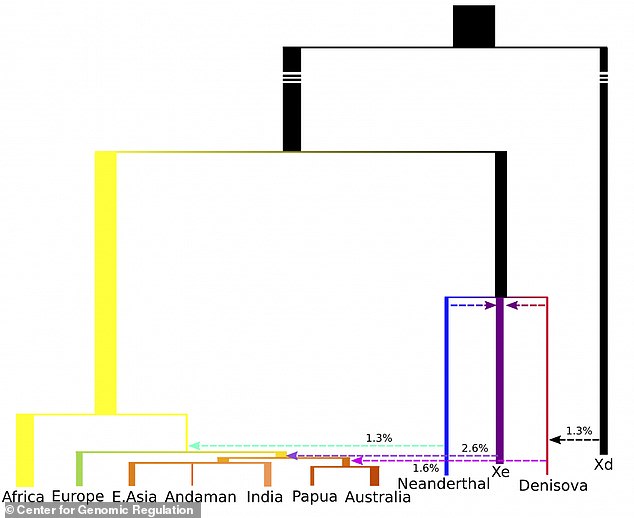 ‘We know that from that time onwards, modern humans cross bred with Neanderthals in all the continents, except Africa, and with the Denisovans in Oceania and probably in South-East Asia, although the evidence of cross-breeding with a third extinct species had not been confirmed with any certainty.’

According to the researchers, modern DNA reflects the intermingling that took place so many millennia ago.

But until recently, it was difficult to explain the origin of fragments within the human genome that suggest the existence of a ‘third ancestor.’

The deep learning technique has now allowed researchers to pinpoint these transitions within the populations.

The algorithm ‘imitates the way in which the nervous system of mammals works, with different artificial neurons that specialize and learn to detect, in data, patterns that are important for performing a given task,’ explains Òscar Lao, principal investigator at the CNAG-CRG.

‘Whenever we run a simulation we are travelling along a possible path in the history of humankind.

Of all simulations, deep learning allows us to observe what makes the ancestral puzzle fit together.’

According to the researchers, the previously unknown extinct hominid likely descended from the Neanderthal and Denisovan populations as a result of interbreeding between the two. 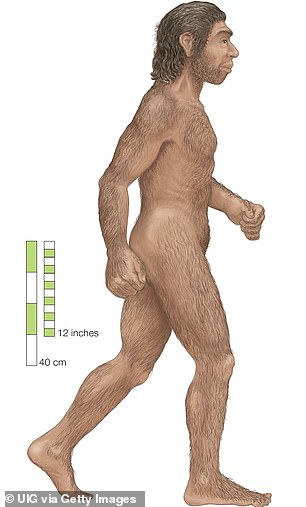 ‘Our theory coincides with the hybrid specimen discovered recently in Denisova,’ said Mayukh Mondal, an investigator from the University of Tartu.

But, the researcher says, ‘as yet we cannot rule out another possibility.’

WHAT DO WE KNOW ABOUT HUMANKIND'S JOURNEY OUT OF AFRICA?

The traditional 'Out of Africa' model suggests that modern humans evolved in Africa and then left in a single wave around 60,000 years ago.

The model often holds once modern humans left the continent, a brief period of interbreeding with Neanderthals occurred.

This explains why individuals of European and Asian heritage today still have ancient human DNA.

There are many theories as to what drove the downfall of the Neanderthals.

Experts have suggested that early humans may have carried tropical diseases with them from Africa that wiped out their ape-like cousins.

Others claim that plummeting temperatures due to climate change wiped out the Neanderthals.

The predominant theory is that early humans killed off the Neanderthal through competition for food and habitat.

How the story is changing in light of new research

Recent findings suggest that the 'Out of Africa' theory does not tell the full story of our ancestors.

Instead, multiple, smaller movements of humans out of Africa beginning 120,000 years ago were then followed by a major migration 60,000 years ago.

Most of our DNA is made up of this latter group, but the earlier migrations, also known as 'dispersals', are still evident.

This explains recent studies of early human remains which have been found in the far reaches of Asia dating back further than 60,000 years.

For example, H. sapiens remains have been found at multiple sites in southern and central China that have been dated to between 70,000 and 120,000 years ago.

Other recent finds show that modern humans reached Southeast Asia and Australia prior to 60,000 years ago.

Based on these studies, humans could not have come in a single wave from Africa around this time, studies have found.

Instead, the origin of man suggests that modern humans developed in multiple regions around the world.

The theory claims that groups of a pre-human ancestors made their way out of Africa and spread across parts of Europe and the Middle East.

From here the species developed into modern humans in several places at once.

The argument is by a new analysis of a 260,000-year-old skull found in Dali County in China's Shaanxi Province.

The skull suggests that early humans migrated to Asia, where they evolved modern human traits and then moved back to Africa.