The exhibition gives a deep insight into the research of a passionate art historian, Marcell Restle (1932-2016), who dedicated his ilfe in great intensity to the study of Asia Minor in Late Antique and Byzantine as well as Seljuk and Ottoman times.

ANAMED is organizing its new exhibition entitled  “Archival Memories: Marcell Restle's Research in Anatolia and Beyond” within the scope of the "5th International Sevgi Gönül Byzantine Studies Symposium." The exhibition gives a deep insight into the research of a passionate art historian, Marcell Restle (1932–2016), who dedicated his life in great intensity to the study of Asia Minor in Late Antique and Byzantine as well as Seljuk and Ottoman times.

Marcell Restle taught at the universities of Vienna and Munich while he made countless study trips around the Eastern Mediterranean, including to Istanbul and Anatolia, which led him to become an expert in the field of art history and architecture. Restle took on a pioneering role in the systematic examination of the heritage of Cappadocia, one of the crossroads of Anatolia; his detailed studies of Byzantine architecture and mural paintings across this wide region is considered from many perspectives to be the beginning of modern art historical studies of Cappadocia. In the course of an intense career that lasted approximately 60 years and led to the near complete loss of his sight, Restle produced an extensive archive of thousands of slides, photographs, written documents, technical and photogrammetric drawings, and video and sound recordings, all the result of meticulous and patient labor. Two years before his death, in 2014, Restle donated this rich collection to the Department of Art History of the University of Vienna. 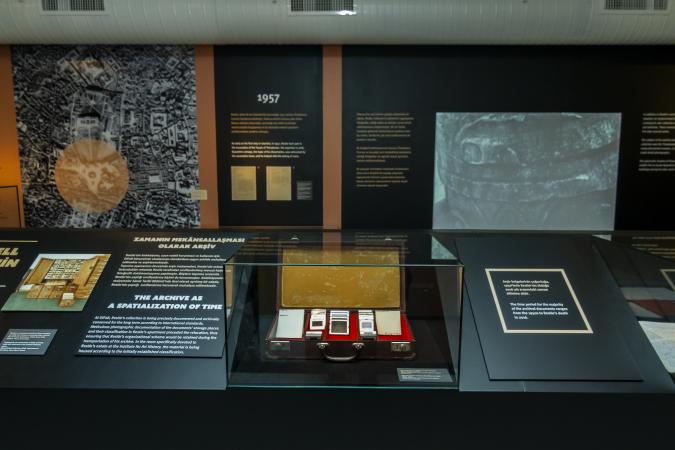 Curated by Lioba Theis, Su Sultan Akülker, and Caroline Mang, “Archival Memories” presents a small but important part of his collection at DiFaB (Digitales Forschungarchiv Byzanz = Digital Research Archive for Byzantium) that bears the deep traces of a life dedicated to science. The exhibition consists of four chapters: In the first three, Restle’s work in Istanbul, Anatolia, and the Hauran region of Syria is exhibited chronologically. The fourth chapter displays a short account of the archive.

Focusing on the DiFaB’s archive and supporting it with several collections, “Archival Memories” on the one hand informs viewers about how a researcher organized his working day, how he systematically allotted his time, and what methods he used in the pre-digital age. On the other hand, it aims to present from retrospective perspectives the states of numerous cultural assets, most of which remain today only as memories within urban structures.

Restle was born on 15 January 1932 in a small town in southern Germany—in Bad Waldsee—as the second son of a family of craftsmen who were very committed to his upbringing and education. His early enthusiasm for art and architecture led him to study art history, Byzantine studies, and the history of Christianity at the universities of Tübingen and Munich immediately after graduating from the humanistic gymnasium in Bad Wurzach. Mediated by the German Academic Exchange Service, he received a scholarship from the Turkish government in 1956 to continue his studies at Istanbul University where he took courses from German and Turkish professors such as Kurt Erdmann, Halet Çambel, and Semavi Eyice. The in-depth study of Islamic art in general and Ottoman art in particular opened up new perspectives for Restle. The studies he made of Islamic, Seljuk, and, especially, Ottoman art and architecture, as well as of Byzantine art; the classes he taught at the universities of Vienna and Munich on these topics; and the countless study trips he made around the Eastern Mediterranean, including to Istanbul and Anatolia, made him an expert in the field of architecture, especially in the systematic documentation of buildings. In 1994, Restle retired from his university professorship. Consisting of 17,000 slides, over 10,000 black-and-white photographs, several documents, various sketches and large-scale drawings as well as many audio and video materials, Restle donated his library and collection of photographs and architectural plans to the Digital Research Archive for Byzantium (DiFaB) at the Department of Art History, University of Vienna in 2014. Marcell Restle passed away in Holy Spirit Hospital in the town Bad Waldsee (Germany), where he was born, on the 25th of January 2016.

The Digital Research Archive for Byzantium (Digitales Forschungarchiv Byzanz - DiFaB) was founded in 2007 by Lioba Theis at the University of Vienna’s Institute of Art History. DiFaB’s holdings consist of photographic material from Lioba Theis’ nine study trips to Istanbul (2007), Serbia and Kosovo (2009), Albania and northwestern Greece (2010), Bulgaria (2011), Cyprus (2012), Crete (2013), Istanbul-Bursa-Iznik (2014), Armenia (2015), and Georgia (2017). In addition to Marcell Restle’s collection, DiFaB has housed the collection of the German art historian Horst Hallensleben (1928–98) since 2007.

The mission of DiFaB is to collect and digitally preserve image collections relating to the material culture of the Byzantine Empire and its sphere of influence, to continue the documentation of associated sites and objects, and to make them publicly accessible through an online database. DiFaB is committed to preserving the existing material substance of the visual resources while making the digital images openly available to a global audience of scholars and students for the benefit of future generations.