These are the results of the Kurdish-Italian Faida Archaeological Project, co-directed by Prof Daniele Morandi Bonacossi (University of Udine – Italy) and Assis. Prof Dr Hasan Ahmed Qasim (Directorate of Antiquities of Duhok – Kurdistan Region of Iraq), a joint archaeological project working in the Duhok area of the northern Kurdistan Region of Iraq.

In September-October 2019, the joint Italian-Kurdish team made an extraordinary discovery in the archaeological site of Faida (20 km south of Duhok). 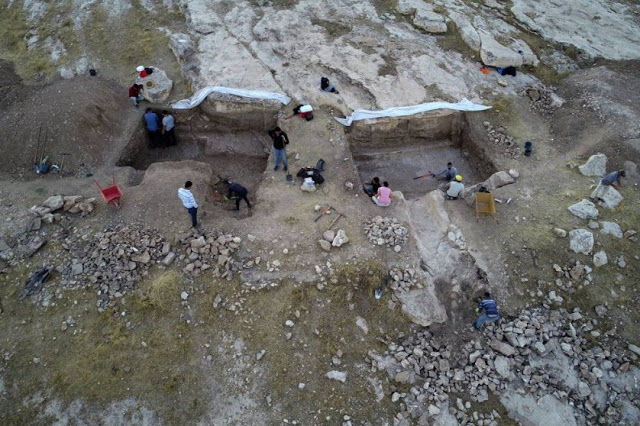 Ten unique Assyrian rock reliefs of the eighth-seventh century BC were excavated on the eastern side of an approximately 7-km long canal dug into the bedrock. 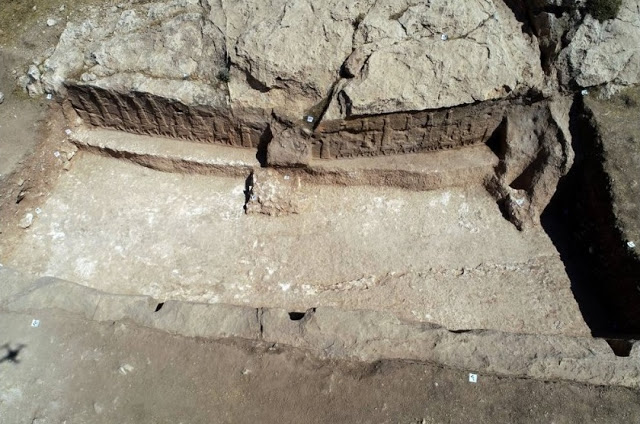 The Faida canal, which rounds the western spur of Mount Ciya Daka, cuts through the limestone of the hill range and was fed by a series of karst springs – in part still active today – situated in several small wadis along the mountain’s northern flank. 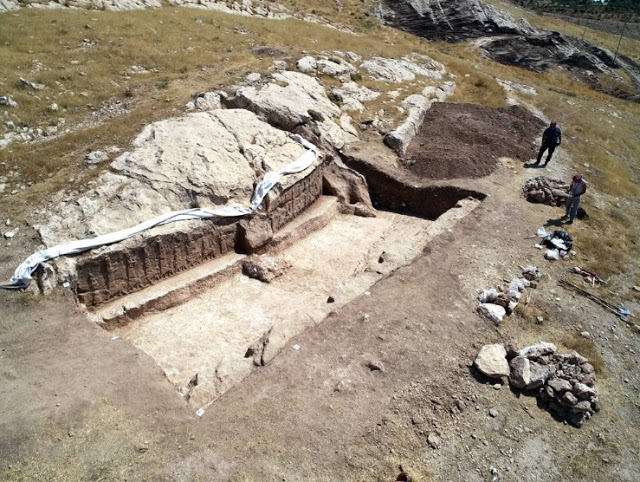 The canal had an average width of 4 m and today is buried under deposits eroded from the mountain. 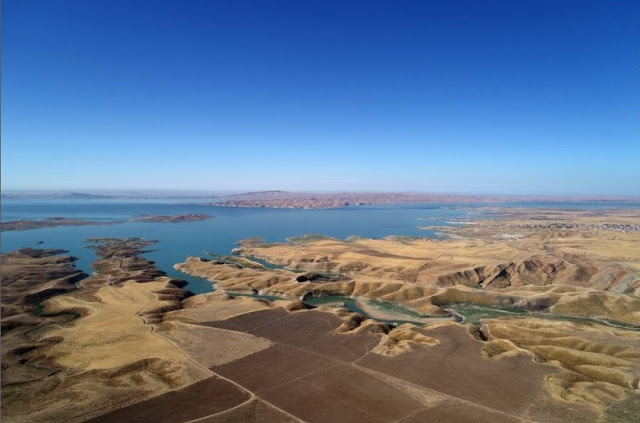 From the primary canal, several offtakes diverted water into secondary canals to irrigate the neighbouring fields and thus improve the agricultural production of the countryside in the hinterland of Nineveh, the last capital of the Assyrian Empire. 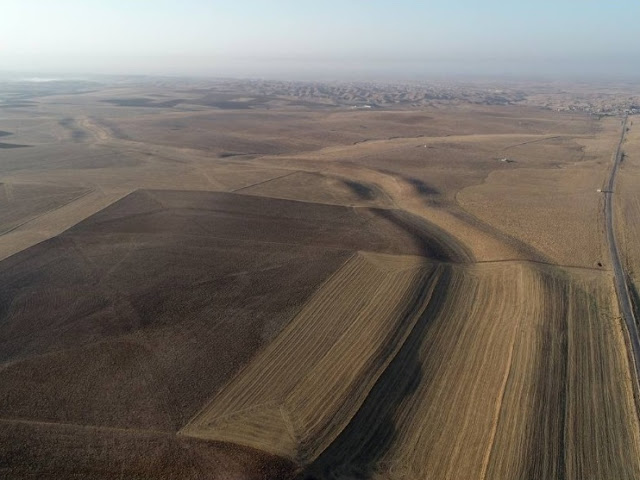 The canal was possibly planned by the Assyrian king Sargon (720-705 BC) and along its east bank the king had panels – almost 5 m high and 2 m wide – sculpted, showing the ruler on both sides of a line of deities mounted on their sacred animals. Before the excavation, only the upper parts of the sculpted panel frames emerged from the colluvial deposits and in some cases it was possible to recognize the crowns of the deities depicted on the buried panels. 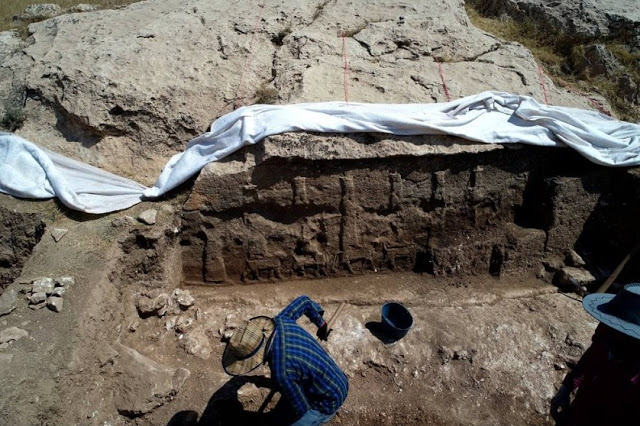 In 1973, the British archaeologist Julian Reade identified three of these panels buried along the canal, but was not able to investigate them further due to the unstable political and military situation present in the region during the conflict between the Kurdish Peshmerga and the army of the Baathist regime. The Faida reliefs were recorded in the Iraqi Official Journal under entry 2269 (14 August 1983). 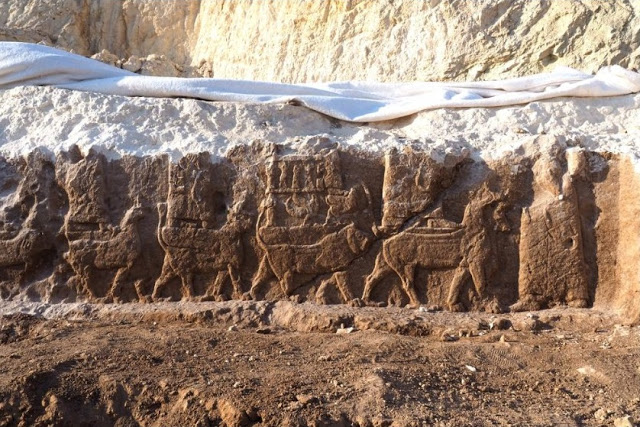 Forty years later, in August 2012, during archaeological survey work in the Duhok region, the Italian Archaeological Mission to the Kurdistan Region of Iraq of Udine University directed by Daniele Morandi Bonacossi visited the site and identified six new rock reliefs. In 2019, thanks to cooperation between the Directorate of Antiquities of Duhok and the University of Udine, and the support of the Italian Consulate in Erbil, the Assyrian rock reliefs of Faida were finally brought to light. 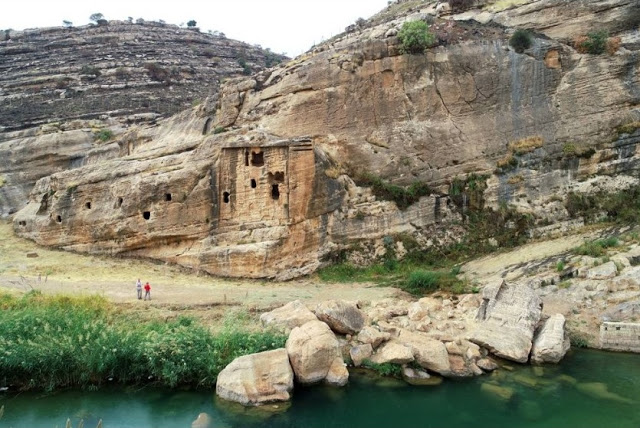 Assyrian rock reliefs are extremely rare monuments. With the sole exception of the Mila Mergi stela, the last reliefs discovered in Iraq were made know to international scholarship almost two centuries ago – in 1845 – by the French Consul in Mosul Simon Rouet, who identified the reliefs in Khinis and Maltai. 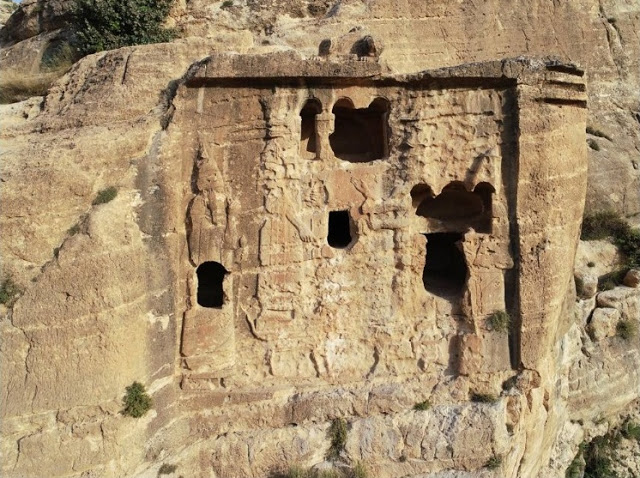 The Faida reliefs portray a procession of statues of seven of the main Assyrian deities standing on podia in the shape of striding animals in the presence of the king – who is depicted twice, at both the left and right ends of each panel. The figures are shown in profile facing left and thus looking in the same direction as the current flowing in the channel. 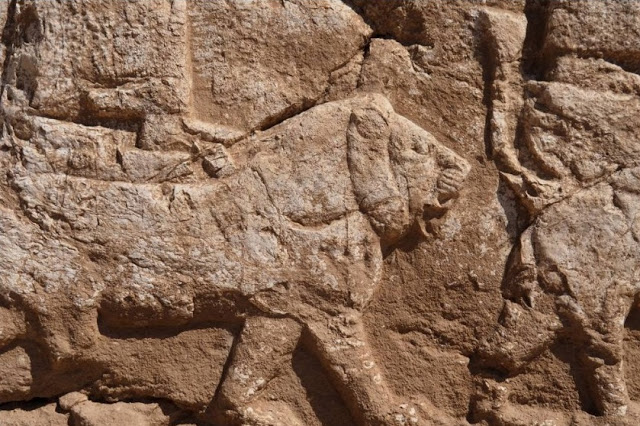 The deities can be identified as Ashur, the main Assyrian god, on a dragon and a horned lion, his wife Mullissu sitting on a decorated throne supported by a lion, the moon god Sin on a horned lion, the god of wisdom Nabu (?) on a dragon, the sun god Shamash on a horse, the weather god Adad on a horned lion and a bull, and Ishtar, the goddess of love and war, on a lion. 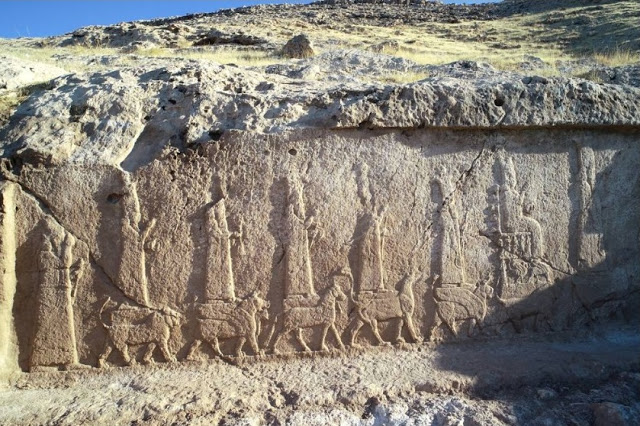 Today this remarkable rock art complex is part of a still post-war scenario, strongly threatened by vandalism, illegal excavations and the expansion of the nearby village and its productive activities that have already seriously damaged it. Moreover, in the years between the birth of the Islamic State as a self-proclaimed state entity in 2014 and its defeat in 2016, the Faida reliefs were located only 25 km from the front line. 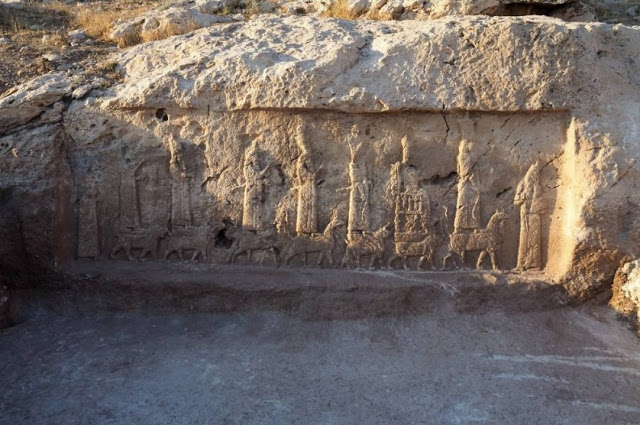 Due to these threats, the joint Italian-Kurdish project is a salvage operation, which aims not only to bring to light and study these extraordinarily important Assyrian reliefs (ten have already been excavated, but many others are still waiting to be identified and unearthed), but also to record them using new technologies, to conserve them – and above all to protect this unique and exceptional archaeological site. During the 2019 field season, the canal and the reliefs have been excavated and cleaned, where necessary consolidated, and recorded by means of UAV technology, laser scanning, and digital photogrammetry. 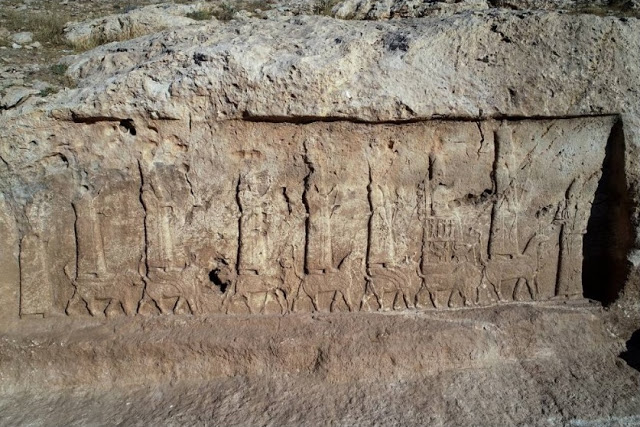 Prof Jason Ur (Harvard University) provided invaluable support in the UAV mapping of the canal with his senseFly eBee mapping drone, which made it possible to capture high-resolution aerial photos of the entire canal that were later transformed into accurate orthomosaics and 3D models. Finally, the state of conservation of all reliefs was assessed, rock samples were taken for minero-petrographic and physical characterization and mineralogical, chemical, and biological characterization of the deterioration products. Goal of these preliminary analyses is to plan targeted conservation treatment of the Faida reliefs. 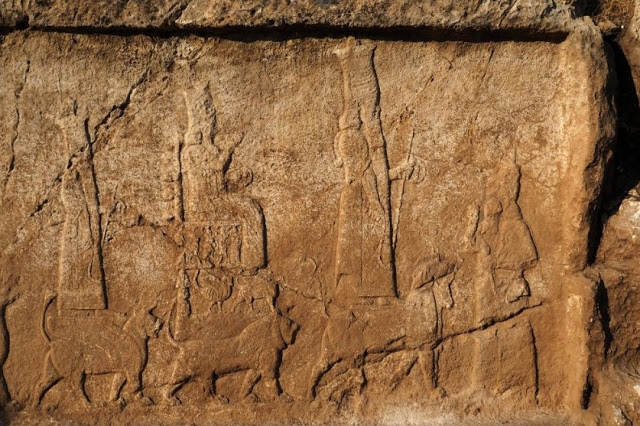 At the end of the excavation and conservation work, which will continue in the next years, in cooperation with the Duhok Directorate of Antiquities an archaeological park of the Faida Assyrian reliefs will be established. This will allow the canal and its rock reliefs to be opened to sustainable local and international tourism, thus allowing widespread dissemination of knowledge about them, and their adequate protection. 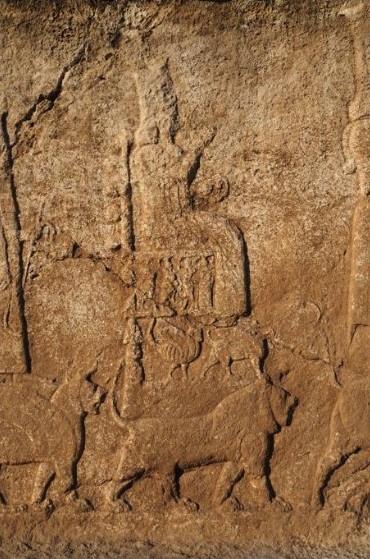 The Faida canal with its extraordinary reliefs will thus join the other Assyrian canals, aqueducts and rock reliefs existing in the Duhok region (Khinis, Maltai and Shiru Maliktha reliefs, and Jerwan aqueduct). This complex monumental hydraulic system built by the Assyrian king Sennacherib has been studied and documented by the Italian Archaeological Mission to the Kurdistan Region of Iraq of Udine University since 2012.

A project for the creation of an archaeological-environmental park of Sennacherib’s irrigation network in the Duhok region, a conservation project regarding the Maltai and Khinis rock reliefs, and a dossier proposing the inscription of this hydraulic system in the UNESCO World Heritage Tentative List have been drafted and recently published in the first volume of the new monograph series “Italian Archaeological Mission to the Kurdistan Region of Iraq. Monographs”. 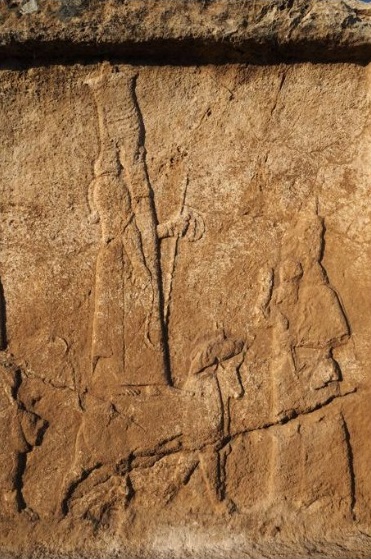 The joint Italian-Kurdish Faida Archaeological Project of Udine University and the Duhok Directorate of Antiquities is supported by the Kurdistan Regional Government (KRG – Iraq), the Directorate General of Antiquities of the KRG, the Italian Ministry of Foreign Affairs and International Cooperation, the Italian Ministry of Education, Universities and Research, the Friuli Venezia Giulia Regional Government, the Friuli Banking Foundation, ArchaeoCrowd Ltd, and the Italian Agency for Development Cooperation.