Maize-centric diet may have contributed to ancient Maya collapse

The question of how to best adapt to extreme climate is a critical issue facing modern societies worldwide. In The Role of Diet in Resilience and Vulnerability to Climate Change among Early Agricultural Communities in the Maya Lowlands, published in Current Anthropology, authors Claire Ebert, Julie Hoggarth, Jaime Awe, Brendan Culleton, and Douglas Kennett examine the role of diet in the ability of the ancient Maya to withstand periods of severe climatic stress. (look for read: https://www.journals.uchicago.edu/doi/10.1086/704530)

The authors found that an increase in the elite Maya's preference for a maize-based diet may have made the population more vulnerable to drought, contributing to its societal collapse.

"Population expansion and anthropogenic environment degradation from agricultural intensification, coupled with socially conditioned food preferences, resulted in a less flexible and less resilient system," Ebert writes. "Understanding the factors promoting resilience in the past can help mitigate the potential for similar sudden and dramatic shifts in our increasingly interconnected modern world." 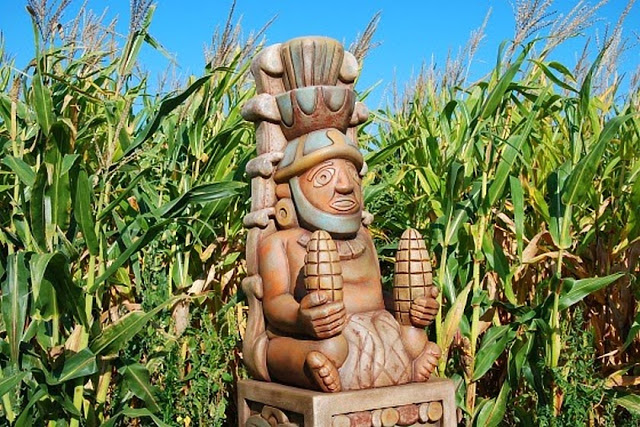 The study was conducted using the remains of 50 human burials from the ancient Maya community of Cahal Pech, Belize. Using AMS radiocarbon dating, Ebert and collaborators determined the age of the human burials found at Cahal Pech, both from the site core and surrounding settlements. These burials dated as early as the Middle Preclassic Period, between 735-400 B.C., and as late as the Terminal Classic, between approximately 800-850 A.D.

At the Human Paleoecology and Isotope Geochemistry Laboratory at Penn State University, Ebert measured stable carbon and nitrogen isotope values of the bone collagen in the burials to determine characteristics of individual diets and how they changed through time. Of particular interest was the increasing proportion of C4 plants in the diet, which includes the Maya staple crop maize.

For the burials dating to the Preclassic and Early Classic periods, representing the early inhabitants of the Cahal Pech, Ebert's results suggest that both elites and commoners had a diverse diet that, in addition to maize, included wild plants and animals procured through hunting. Ebert suggests that this diversity of food provided a buffer when a multi-century drought impacted the May lowlands between 300-100 B.C. "The resilience of complex social systems at Cahal Pech from the Preclassic through Early Classic was dependent in part upon a broad subsistence strategy that helped to absorb shocks to maize-based food production in the context of drought," Ebert writes.

Things took a turn at during the Terminal Classic period, between 750 and 900 A.D., when growing social hierarchies and population expansion led to the intensifying of agricultural production and increasing reliance on maize. During this time frame, Ebert found that humans from surrounding settlements at Cahal Pech had different carbon values than the site's center, where the elite class lived.

"Our results show a pattern of highly restricted stable nitrogen and carbon isotopes for elite individuals in the Late and Terminal Classic, which corresponds to a hyper-specialized maize-based diet that persisted through the final abandonment of the site," Ebert writes.

Elite demands on the local population for increased maize production, and a preference for this drought-intolerant crop, was likely a factor that contributed to the failure of the Cahal Pech socio-political system in the face of another severe drought at the end of the Terminal Classic Period.

"The study speaks to the importance of diet in the resilience and decline of ancient societies and contributes to our understanding of vulnerability to climate change among modern traditional farming communities as well as industrialized nations," Ebert writes.