The dispersal of anatomically modern human populations out of Africa and across much of the rest of the world around 55 to 50 thousand years before present (ka) is recorded genetically by the multiple hominin groups they met and interbred with along the way, including the Neandertals and Denisovans.

The signatures of these introgression events remain preserved in the genomes of modern-day populations, and provide a powerful record of the sequence and timing of these early migrations, with Asia proving a particularly complex area.

At least 3 different hominin groups appear to have been involved in Asia, of which only the Denisovans are currently known. Several interbreeding events are inferred to have taken place east of Wallace’s Line, consistent with archaeological evidence of widespread and early hominin presence in the area. However, archaeological and fossil evidence indicates archaic hominins had not spread as far as the Sahul continent (New Guinea, Australia, and Tasmania), where recent genetic evidence remains enigmatic.

While two of the archaic groups are currently known - the Neanderthals and their sister group the Denisovans from Asia - the others remain unnamed and have only been detected as traces of DNA surviving in different modern populations. Island Southeast Asia appears to have been a particular hotbed of diversity.

Published in the Proceedings of the National Academy of Sciences, researchers from the University of Adelaide's Australian Centre for Ancient DNA (ACAD) have mapped the location of past "mixing events" (analysed from existing scientific literature) by contrasting the levels of archaic ancestry in the genomes of present-day populations around the world. (Look for read: https://www.pnas.org/content/early/2019/07/11/1904824116)

"Each of us carry within ourselves the genetic traces of these past mixing events," says first author Dr João Teixeira, Australian Research Council Research Associate, ACAD, at the University of Adelaide. "These archaic groups were widespread and genetically diverse, and they survive in each of us. Their story is an integral part of how we came to be.

"For example, all present-day populations show about 2% of Neanderthal ancestry which means that Neanderthal mixing with the ancestors of modern humans occurred soon after they left Africa, probably around 50,000 to 55,000 years ago somewhere in the Middle East."

But as the ancestors of modern humans travelled further east they met and mixed with at least four other groups of archaic humans. 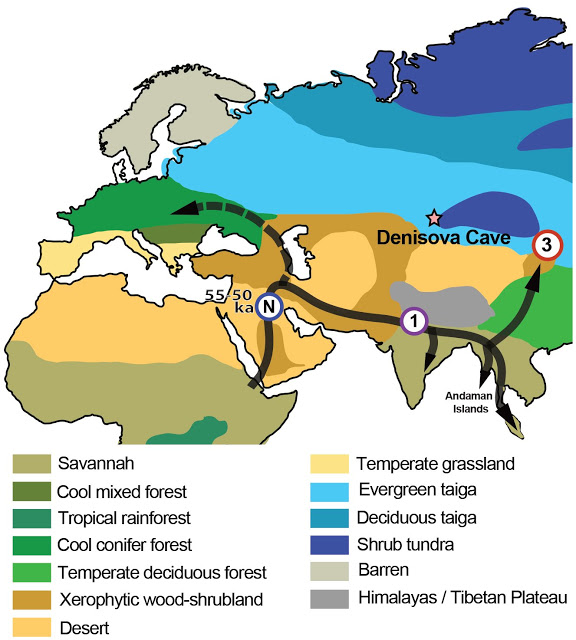 A map showing where the ancestors of modern humans appear to have met and mixed with archaic hominins [Credit: University of Adelaide]

"Island Southeast Asia was already a crowded place when what we call modern humans first reached the region just before 50,000 years ago," says Dr Teixeira. "At least three other archaic human groups appear to have occupied the area, and the ancestors of modern humans mixed with them before the archaic humans became extinct."

Using additional information from reconstructed migration routes and fossil vegetation records, the researchers have proposed there was a mixing event in the vicinity of southern Asia between the modern humans and a group they have named "Extinct Hominin 1".

Other interbreeding occurred with groups in East Asia, in the Philippines, the Sunda shelf (the continental shelf that used to connect Java, Borneo and Sumatra to mainland East Asia), and possibly near Flores in Indonesia, with another group they have named "Extinct Hominin 2". 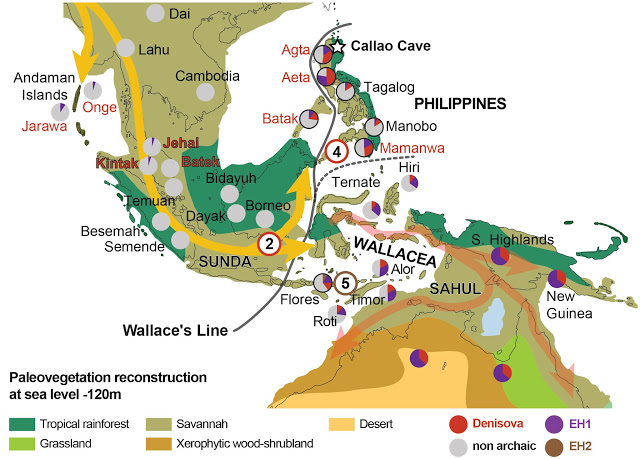 Proposed route of the ancestors of modern humans out of Africa and through Island Southeast Asia
[Credit: University of Adelaide]

"We knew the story out of Africa wasn't a simple one, but it seems to be far more complex than we have contemplated," says Dr Teixeira. "The Island Southeast Asia region was clearly occupied by several archaic human groups, probably living in relative isolation from each other for hundreds of thousands of years before the ancestors of modern humans arrived.

"The timing also makes it look like the arrival of modern humans was followed quickly by the demise of the archaic human groups in each area."