An ox-driven cart sculpture and a three-piece Sidamara sarcophagus, both dated back to 3000 – 2000 B.C., will be brought to Turkey from the U.K., said the statement.

In Bonham Auction House, the U.K., an ox-driven cart sculpture and a three-piece Sidamara sarcophagus, dating back to 3000 – 2000 B.C. Anatolia, were found to be on sale.

After confirmation that similar artifacts are located in Sanliurfa Museum collection, Professor Fikri Kulakoglu, who has publications on this issue, was requested to prepare a report. 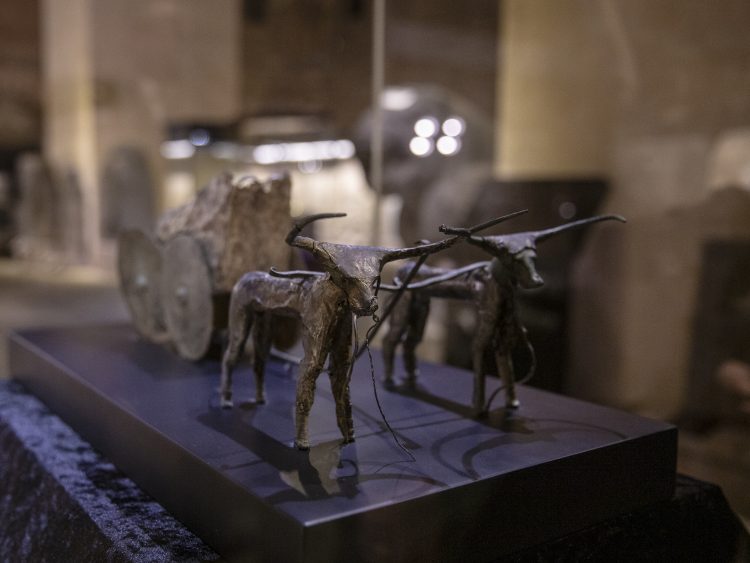 The report was submitted to London Turkish Culture and Tourism Office, after which the auction house was asked to stop the sale. After the rejection of this request, British police were contacted to support the authorities to stop the sale.

The second artifact to be brought to Turkey is a Sidamara style sarcophagus. Isparta Goksogut Municipality found it broken into five pieces in the 1980s and brought it to the municipality, after which three main pieces along with smaller ones were brought and recorded into Isparta Museum.

The issue was forwarded to the Ministry of Culture and Tourism by Professor Musa Kadioglu, upon which Sotheby Auction House was contacted by Interpol-Europol and asked about the current owner. The auction house said they were sold to two people by one seller in 1989, but did not disclose the names of the owners due to confidentiality reasons.

After adding them into the stolen artifacts database of Interpol, the search for locating the artifacts, photographed in Turkey, started on an international scale. Ministry authorities found one piece scheduled to be sold on December 4, 2019, in Christie’s Auction House. Collaborative efforts of Interpol-Europol and British police stopped the process of the sale of the artifacts.

Thanks to data provided by Turkey, the British police were convinced that the artifacts were taken out of Turkey illegally. The police mediated the negotiations with the owners.

Artifacts to be hosted in Museum of Anatolian Civilizations

On February 15, both artifacts will be brought to Turkey. Turkish Airlines will facilitate the process of bringing back the stolen artifacts, by carrying them into the country free of charge.

Artifacts will be introduced to the press in a launching assembly; among the attendees will be Minister of Culture and Tourism Mehmet Nuri Ersoy. They will be exhibited in the Ankara Museum of Anatolian Civilizations.