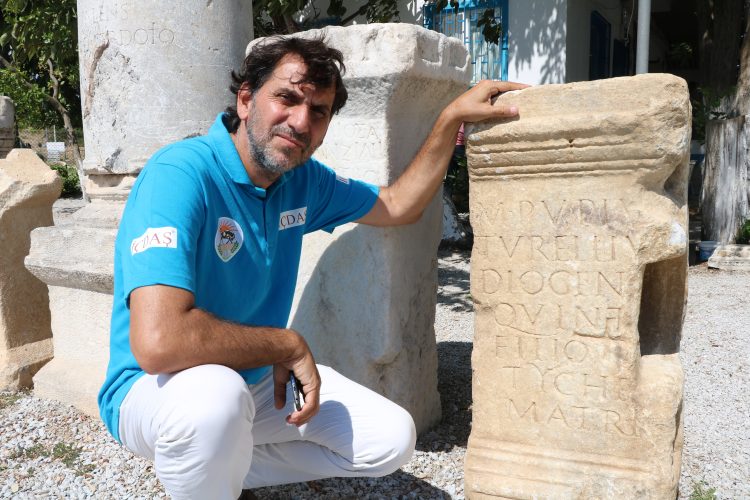 A memorial tomb inscription has been unearthed in the ancient city of Parion in the Biga district of northwestern province of Çanakkale. Archaeologists believe that the inscription dates back 1,900 years.

Excavations continue in Parion to bring to light the 2,700-year-old history of the ancient city, one of the important port cities of the Ancient Age and located near the village of Kemer. Excavations have been continuing in the ancient city throughout the year.

Studying the writing on a reversed stone in the ancient city, archaeologists found out that it was the inscription of a monumental tomb.

The head of Parion excavations and Ondokuz Mayıs University Archaeology Department’s Professor Vedat Keleş said that they were very excited by the finding.

Keleş stated that they found this epigraphic work not in excavations but around the aqueduct at the entrance of the village, and added, “There are two ‘Greek’ names on the inscription. It is a tomb inscription dedicated to a child by a Roman and to his deceased mother. Probably this is a memorial tomb. The Greek names are ‘Diogenes’ and ‘Tykhe.’ So, this shows us the existence of a Grecian society, who lived here after Parion became the Roman colony.”

Keleş said that the inscription may have been recovered during infrastructure work in the region in previous years.

Stating that Parion is a legion city, Keleş said, “The inscription is dedicated by a Roman citizen to his son, Diogenes, and his mother, Tykhe. It was probably located on a monumental tomb in the southern necropolis of Parion. But when we examine the inscription, it shows us that perhaps a Roman married a Grecian and that there was a Grecian population in the city when it was the first colony. Giving the child a Greek name may be a gesture of respect for his wife, or perhaps embracing the Greek citizens here, meaning ‘We care about you.’“