A magnificent bas-relief carving, dating back to over 3,000 years ago, was discovered by a local a few days ago in a mountainous region, somewhere between Ezgeleh and Sarpol-e Zahab in Kermanshah province, western Iran, provincial tourism chief Omid Qaderi said on Wednesday, ISNA reported.

"After the discovery was reported, a team of archaeologists and heritage experts was dispatched to the place, which is on the face of a cliff adjacent to a river," the official noted.

"Surveys revealed that this treasured work belongs to Mesopotamian civilization and [the then] rulers of this region," Qaderi said.

The bas-relief highlights the "strategic" importance of Ezgeleh and Sarpol-e Zahab in prehistoric times when the two served as a boundary between Mesopotamia and the Iranian plateau, the official explained.

"Information obtained from this prominent rock-carved relief shows that many wars were waged in the region at that time when rulers left this valuable work to show their power."

Qaderi added that the newly-discovered relief is on a par with Anubanini reliefs, which are widely believed to be the oldest rock reliefs in the country.

Situated about twenty kilometres east of the border with Iraq, the four heavily damaged reliefs depict Lullubian kings as conquerors.

The kingdom of Lullubi, in the valley of the Diyala river, is mentioned several times in the cuneiform texts from ancient Iraq; the first references date to the third millennium BC (Naram-Sin’s famous Victory Stela in the Louvre), while the most recent texts belong to the Neo-Assyrian age. 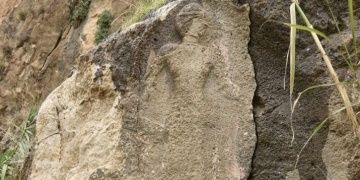