The prehistoric site of Renancourt, in Amiens, has been known for many years and long remained one of the few sites providing evidence for human presence in northern France during the Early Upper Palaeolithic (35,000 – 15,000).

Near the confluence of the Selle and Somme Valleys, in a neighborhood of southwest Amiens, the site is sealed within Eolian silts (loess) attributed to the end of the last glacial period (between 40,000 and 10,000 years ago). Four meters below the current ground level, a concentration of very well-preserved artifacts was discovered.

This concentration has been dated by Carbon 14 to 23,000 years ago (21,000 BC) and is attributed to a late phase of the Gravettian culture, which was present in Europe between 28,000 and 22,000 years ago. The site of Amiens-Renancourt is today one of the rare sites that provides evidence for the presence of Modern Humans (Homo Sapiens) in northern France at the beginning of the Upper Palaeolithic.

The abundant artifacts reveal the diverse activities practiced at this hunting camp. Among the numerous flint artifacts, projectile points (Gravette Points) were used for hunting, while large blades were transformed into other tools, such as knives and scrapers. Abundant bone remains show that horse meat was regularly consumed. Personal ornaments have also been found here, such as the unique perforated disks in chalk. In the full glacial period, this Gravettian hunting camp appears to have been occupied for a few weeks at the end of the warm season, just before autumn. 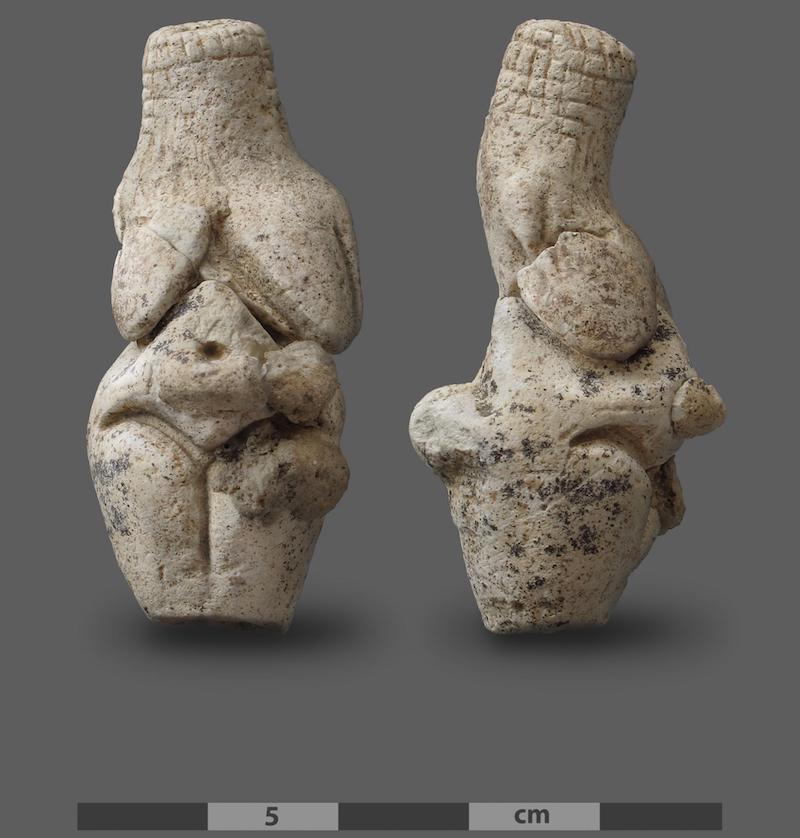 This year, in 2019, the archaeologists have just discovered an exceptional sculpture that joins a remarkable collection of fifteen other Gravettian statuettes, the first of which was discovered in 2014.

Sculpted in chalk and 4 centimeters tall, this “Venus” is steatopygic: the volume of the rear, thighs and breasts is hypertrophied. The arms are barely present, and the face is represented without lines.

This sculpture adheres perfectly to the aesthetic canon of the Gravettian stylistic tradition, which includes the Venuses of Lespugue (Haute-Garonne) and Willendorf (Austria), as well the bas-relief Venus of Laussel (Dordogne). This “Venus” of Renancourt also has a surprising “hairdo” represented by a grid pattern of thin incisions similar to those of the Venus of Willendorf and, especially, of the Venus of Brassempouy (Landes), also known as the “Lady with a Hood.”

A few dozen “Venuses” are known from the Pyrenees to Siberia. In France, only fifteen have been found, mostly in the south-west (Aquitaine, Pyrenees). The last one discovered in a reliable stratigraphic context in France was found in Tursac (Dordogne), in 1959.

Today, the site of Amiens-Renancourt doubles the number of these Gravettian art objects known in France. The archaeologists suspect this site was a workshop for the production of these sculptures as they are accompanied by several thousands of chalk fragments, some of which appear to be manufacturing waste products.

The function and meaning of these Palaeolithic statuettes remain unknown.